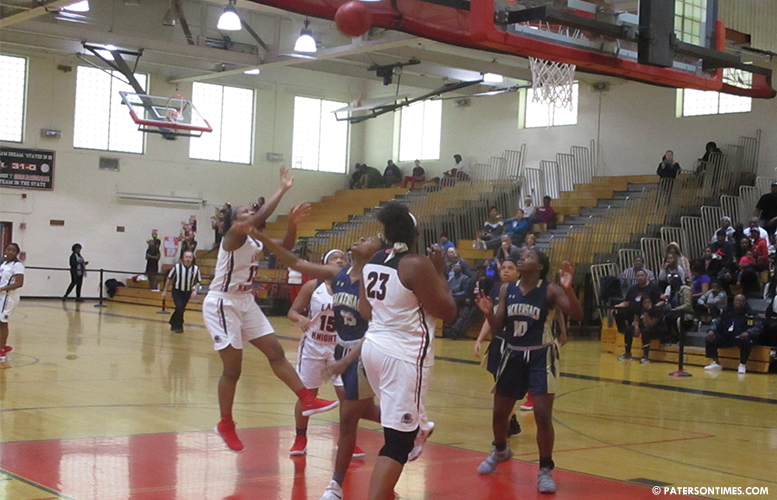 The Cinderella run to the state championship for the girls’ varsity basketball team of Paterson’s John F. Kennedy High School finally came to an end at their home sectional semifinal contest against Hackensack.

The Lady Knights stayed close for much of the contest.  However, in the second half the Comets, slowly but surely, built an insurmountable lead to prevail by a score of 62-40.

Head coach MarQuette Burgess’s youth movement defied all expectations this season as nary a senior is on the team.  Against the visiting Comets, JFK battled for the entire contest. The early first quarter loss of star guard, Kiana Hardison, hampered Kennedy’s efforts. The freshman sensation was not able to play for the rest of the game.  Fortunately, according to team officials, her injury was a sprain not something more serious.

The game tipoff was followed with both teams missing shots. Kennedy’s junior center, Jamirah Johnson, made her presence known immediately with a blocked shot. Hardison led a fast break and dished to junior Taneisha Gilbert for two. Hackensack’s sophomore forward/center, Kyara Cowan, was then fouled in the act of shooting. 1 of 2 consequent free throws found their mark.

Ahead, 4-1, midway through the 1st frame, Hackensack slapped on a full court press. A pickpocket and coast-to-coast by the Comets’ Deisha Christmas followed. Fouled in the act, the junior speedster sank both free throw attempts.  Hackensack senior Bianca Myrie grabbed a defensive rebound, dribbled to the middle of the court, and fired a bullet to senior forward Caleigh Golabek under the basket. Golabek returned the favor to Myrie, at the top of the key, for a dramatic 3-point rainbow.  In a battle that would continue for the entire contest, the Comets’ Cowan challenged JFK’s Johnson in the lane. Johnson proved victorious in their first encounter with a blocked shot.

Both squads employed full court pressure and exchanged turnovers.  Golabek broke the offensive dry spell with a nice turn-around jumper in the paint for Hackensack.

It was then that Hardison zig-zagged into the lane for a lay-up.  Following her shot attempt, the Knights’ floor leader appeared to hop on one foot while heading out of bounds.  Hardison then crashed to the hardwood and momentarily remained motionless.  As coaches immediately rushed to her side to help, a hush fell over the crowd.  To everyone’s relief, Hardison was able to limp off the floor, hobbling on one foot, while supported by two coaches.  Fans from both teams offered a warm round of polite applause.

When play continued, Hackensack’s senior point guard, Gena Kaminski, was fouled while attempting a 3-point effort.  Her 1st and 3rd shots clanged off the rim, but the 2nd found its mark. Sophomore Emma Morrone then entered the contest for the Comets. Johnson and Cowan mixed it up again, with the latter missing an inside shot.  Hackensack’s junior, small forward Brittina Bulli, then picked off an errant Knights’ pass and cruised coast-to-coast for a score.  Soon thereafter, Hackensack sophomore, Ayonna Stone, rebounded an air ball by one of her own teammates. Eventually the ball went to Cowan in the lane who was fouled in the act of shooting, by Johnson. Both attempts from the charity stripe were successful.

Hackensack continued to apply full court pressure.  Morrone was called for a reach-in but the Knights’ junior Taylor Yancey returned the same favor. A defensive rebound by the Comets’ Golabek resulted in a cherry pick score by Kaminski who had snuck behind Kennedy’s defense.  The Comets’ press then picked off a Kennedy cross court pass at half court, resulting in a fast break score by Myrie.  However, the Knights answered with a spectacular charging drive by Adrian Jackson. Fouled while shooting, the sophomore sensation connected on both free throws.  Hackensack concluded first frame action with a successful 3-point bomb and a bucket by Cowan.  The Comets led by a score of 22-9.

An around the horn passing display marked Kennedy’s next offensive possession.  However, the ensuing shot attempt hit nothing but air.  Johnson caught the misfire for the Knights but was tied up, possession going to Hackensack.  Kennedy then employed a half-court trap which forced a missed Comet shot attempt. Gilbert, Yancey, and Johnson then combined to break Hackensack’s press.  The effort culminated with a nice 10-foot jumper by Gilbert from the left baseline.  Gilbert provided an encore by pickpocketing a Comet pass, being fouled in the act of shooting, and hitting 1 of 2 free throws.

Kennedy was called for a contact foul but Hackensack replied with an air ball which bounced off the back board. However, the Comets’ Golabek managed to come up with the rebound, was fouled while shooting, and calmly swished both free throw attempts. JFK’s Gilbert then broke the Comet press and pulled up for a successful, stop and pop in the lane. Yancey’s defensive effort forced a Comet pass to sail out of bounds.

Kennedy then committed a blocking foul, followed by a traveling violation.  The Comets capitalized by hitting 1 of 2 from the charity stripe.  The Comets’ full court pressure was solved by Yancey who was fouled, while dribbling, near mid-court.  A series of missed shots by the Knights followed, yet offensive rebounds did as well, the final of which was put back by Johnson for two.  However, the Comets’ Christmas came right back.  After being fouled in the lane, Christmas snatched the rebound of her own free throw and connected for a score. With 5:23 left in the half, Hackensack led 28-16.

Following a missed 15-foot jumper by the Comets’ Golabek, JFK’s Gilbert was hammered upon gathering in the rebound.  Both free throws that followed swished through the net.  Jenai Blue then entered the contest for Kennedy.  The sophomore center performed admirably for the entire game while affording Johnson a rest.

Hackensack attempted to beat the Knights down court but Blue rejected the Comets’ shot effort.  Blue then contributed a steal but the Kennedy consequential, offensive thrust produced no fruit.  A Hackensack turnover was equalized by a Kennedy shot from between the free throw line and the key which actually went entirely over the backboard.  The squads then traded miscues, Kennedy with an offensive foul and Hackensack with a travelling violation.  Junior Destani Smith intercepted a Comet pass and fired a pass to Blue at the low post.  Blue pivoted, hesitated, and converted a nice jumper off the glass.

In furious up-and-down the court action, both teams missed fast break opportunities. Cowan picked up a loose ball, dribbled the length of the court, was fouled, and hit 1 of 2 free throws for the Comets.  Trailing by 10 points as time ran out on the first half clock, Kennedy set the table for a last shot attempt. However, the 15-foot offering fell short.

The second half saw the Comets full court pressure begin to take its toll.  Several Hackensack steals and resulting baskets were countered by a 3-point play by the Knights’ Gilbert.  Hackensack’s Kaminski was fouled on a long shot attempt.  Her first free throw missed but the second pair hit pay dirt.  Another score, via full court pressure, followed for the Comets.  With 3:25 left in the third frame, the Hackensack lead had grown to 13 points.

The remainder of the contest saw Hackensack gradually add to their advantage. With a comfortable lead, the Comets could afford to slow down the tempo and run valuable minutes off the clock.

Kennedy’s season was highlighted with a quarterfinal state victory earlier in the week over archrival Passaic County Technical Institute.  Gilbert scored a game high 23 points in the contest.

The Lady Knights will be a force to be reckoned with next season with all 5 starters, as well as the entire team, returning.