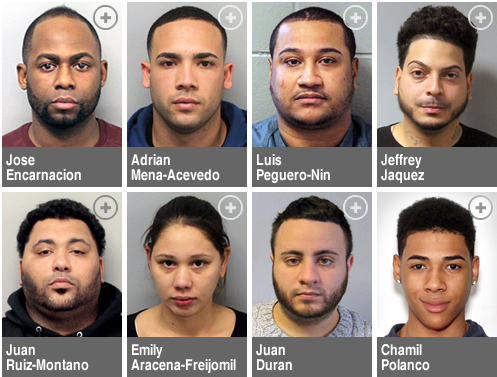 Nine people were indicted on Tuesday for their role in a major cocaine supply network that operated out of Paterson, according to the New Jersey Attorney General’s Office. Authorities seized 8 kilos or 17.6 pounds of cocaine, small amount of heroin, 82 pills of fentanyl, 3 handguns, and over $76,000 in cash.

“By dismantling this supply network and locking up its members, we cut off a major source of cocaine for drug dealers in and around New Jersey’s third-largest city,” Attorney General Gurbir Grewal said. “Rather than just locking up street-level dealers or low-level members of this network, we cut deep into the supply line, which is the best way to stop the flow of these destructive drugs into our communities.”

Authorities identified Encarnacion, Mena-Acevedo, and Peguero-Nin as top suppliers in the network. Each have been charged with promoting organized street crime that carries 15-30 years in state prison.

Encarnacion was allegedly the primary supplier in the network. He got cocaine from New York City and supplied it to others in the network like Mena-Acevedo.

Mena-Acevedo and Peguero-Nin are charged with running a drug production facility.

Peguero-Nin is a member of the Trinitarios or 3NI street gang, authoirties alleged. He supplied to alleged fellow gang member Jaquez to supply to street-level dealers.

Jaquez at times got supplies directly from Mena-Acevedo.

Ruiz-Montano worked with Encarnacion to distribute cocaine. He was arrested on December 12, 2017, when his SUV was stopped leaving Encarnacion’s apartment.

Authorities searched the vehicle and found six kilos of cocaine, a scale, and $4,500 in a hidden compartment.

Mena-Acevedo’s girlfriend Aracena-Freijomil and Duran allegedly cut and packaged cocaine for the network. Both also conducted sales at Mena-Acevedo’s direction.

Duran does not face a first-degree charge, authorities said.

Authorities said Mena-Acevedo and Aracena-Freijomil lived together on 20th Avenue in Paterson. Authorities suggested the apartment was used as a drug production facility.

Polanco and Gingo worked for Peguero-Nin, authorities said. Both cut and packaged cocaine at an apartment on Pearl Street in Paterson. Authorities raided the house on December 12, 2017 seizing 3 handguns, an illegal large capacity magazine, hollow point bullets, and other ammo.

Authorities seized a small quantity of cocaine, 82 pills containing fentanyl, and heroin in various stages of packaging from the Pearl Street apartment.

Peguero-Nin, Polanco, and Gingo are each charged with running a drug production facility and firearm offenses.

“Beyond fueling addiction, these narcotics also fuel the violence that inevitably accompanies open-air drug dealing and its turf battles,” Grewal said. “The guns that were seized in this investigation and the alleged gang affiliations that were uncovered further illustrate the danger posed to the Paterson community by the activities of this criminal syndicate.”

The investigation was conducted by the New Jersey Division of Criminal Justice with help from the Passaic County Sheriff’s Office, New Jersey State Police, and Pennsylvania State Police.

“I want to commend the Attorney General’s Office, both the New Jersey and Pennsylvania State Police, and all the members of the Passaic County Sheriff’s Office for their work in this investigation,” Passaic County Sheriff Richard Berdnik said. “This comprehensive, multi-agency operation not only yielded significant results, but it also helped to stop a large-scale, Passaic County-based narcotics distribution ring.”