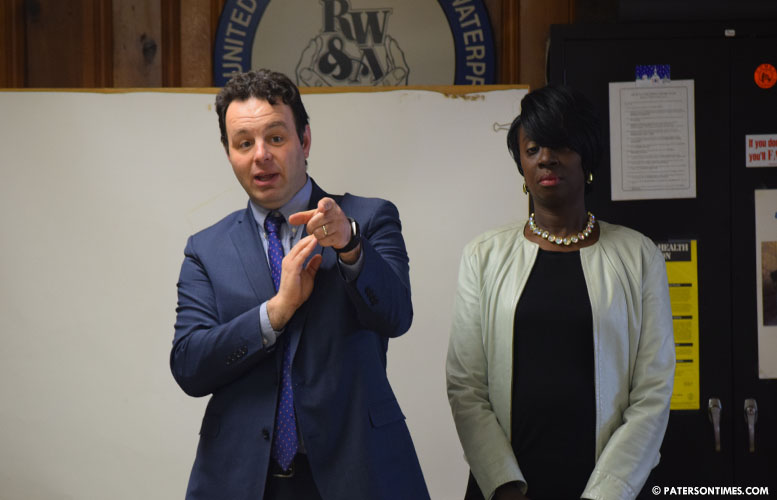 Councilman Andre Sayegh and former school board member Lilisa Mimms have received the backing of the Passaic County Building and Construction Trades Council.

Sayegh is running for mayor while Mimms is vying for one of three at-large council seats. Labor leaders endorsed both candidates at their offices in Haledon on Thursday morning.

“This is something significant to me,” said Sayegh of the endorsement.

“This is major,” said Mimms.

Both Sayegh and Mimms talked about forming a partnership with the council to create an apprenticeship program to get Paterson residents trained for jobs as roofers, bricklayers, and other construction trades.

“If we build our city we will reduce our crime rate,” said Sayegh. “We can’t keep them on the corner. They have to become productive citizens.”

The council has an apprenticeship program that is unknown to most Paterson residents. John Capo, vice-president of the Passaic County Building and Construction Trades Council, said construction is booming. He said work as doubled and there is huge demand for labor. That demand can be filled by well-trained Paterson residents.

“We cannot have economic development without economic empowerment. We have to empower our people so they can develop and progress,” said Mimms.

Paterson has an unemployment rate of 7.5-percent, that is twice the state average. New Jersey’s average is 4.2-percent.

“We encourage our members. We’ll educate them about the two candidates we just endorsed,” said Capo, who is a councilman in Totowa. It’s not just about getting the votes of the members.

“It’s been a long time since the building trades and Paterson had a good relationship,” said Capo.

Sayegh and Mimms view a possible partnership with the union as a win-win for Paterson residents.  Sayegh sees helping residents to get living-wage jobs as a way to reduce some of the ailments that plague Paterson.

There is a big demand for job training in Paterson. In 2016, the city opened 20 job training slots through a partnership with Eastwick College. More than 30 people applied — 20 were selected. 17 of those that received training have secured employment.

“Paterson is the next frontier. I feel like we have all the element in place,” said Sayegh.