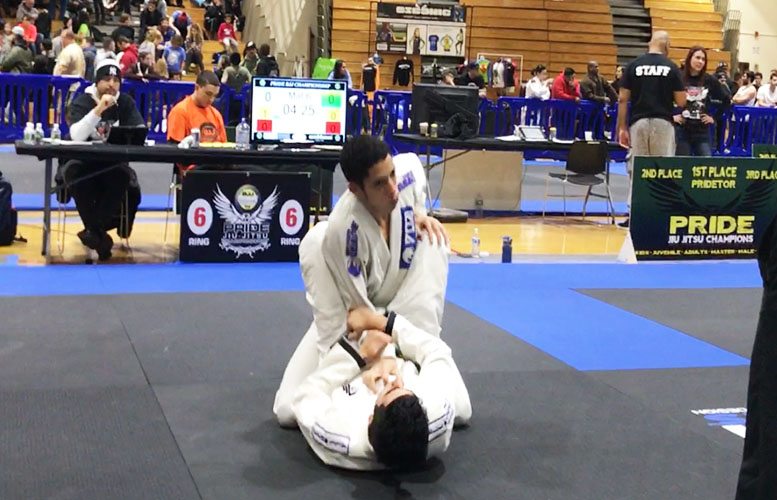 Veronica Aponte walks through the Wrigley Park section – the most crime ridden neighborhood in Paterson – to get to Eastside High School. She needed to learn some self-defense skills to protect herself, so she signed up for the school’s afterschool jiu-jitsu program.

Aponte, who is one of the few girls in the program, was immediately hooked. She not only learned to defend herself, but much more. “It gave me more discipline,” said Aponte, a junior at the School of Culinary Arts, Hospitality and Tourism at Eastside High School. “My grades went up a lot. It made me more focused.”

With an outlet to release aggression, she got into less fights in school, she said. “I was very violent. I was constantly fighting,” she said. “I got flung across the room the first day. I was tired, but I was happy.”

That’s one of the benefits of the program, added Anthony Vasquez, chief custodian at Eastside High School, who coaches the students. “They are releasing their anger,” said Vasquez, who has been in the district for four years. “We call it the gentle art.”

Vasquez is a professional Brazilian jiu-jitsu trainer with Renzo Gracie School out of Nyack, New York. He said students acquire scores of academic and soft skills through the program. “It’s a different story for everybody,” he said.

Four of his students shared their experience at Eastside High School in late January.

“Surprisingly, I picked up better social skills. On the way, I made more friends than I had. I used to be nervous speaking to other people,” said Bryant Polanco, a junior at the School of Information Technology at Eastside High School. “If I were to talk to you previously, I could barely speak to you.”

Polanco was introduced to the program by a friend towards the end of his sophomore year. The students practice three days a week after school until 6 p.m. at the Wrestling Room. The program runs from Sept. to Thanksgiving. It halts from Thanksgiving until mid-February for wrestling. And begins again from mid-February, according to the coach.

Vasquez started the program at Eastside High School three years ago. He said it started with six students and grew to 45 at one point.

“People come and go,” said the coach. 15-20 are regulars. There’s also a second program at John F. Kennedy High School that has 25 students. He coaches students at both schools, he said.

Vasquez has managed to fill a trophy case in the Eastside High School hallway with medals, swords, and belts his students won in competitions over those three years.

Dewar Lausell, another junior at the School of Information Technology at Eastside High School, joined in October and won first place at a competition held at John F. Kennedy High School last December.

“I like to think steps ahead,” said Lausell. “If I’m going to make a move, I like to think what am I going to do after that? Sometimes he’ll shoot and I’ll know instantly to sprawl,” he said. That’s when someone tries to get you by the legs, he said, explaining the meaning of “shoot.”

Sprawling is when he’ll put his weight on his opponent to get away, said Lausell. He gives credit to his coach for his first competition victory.

“It was a struggle. But it felt great when they raised my hand,” said Lausell (pictured, top).

“They train to win,” added the coach.

Most of his students do not take part in any sports, said Vasquez. He tries to get them into the wrestling squad through jiu-jitsu. He described some of them affectionately as “knuckleheads.”

“I quit like three teams because of warm ups,” said Porfirio Matos, another junior at the School of Information Technology at Eastside High School.

Matos never officially quit. He simply decided not to show up.

“He didn’t tell me anything,” said the coach. “Every time I saw him, I’d ask him ‘Yo you got to come to practice.’ I spoke to him as if he never quit.”

Matos, 17, faced a 23-year-old opponent at a competition. His opponent tapped out.

Aponte has been taking jiu-jitsu since she was a freshman, she said. She said it has helped her to focus on school work.

When asked if she has beaten any of the guys, Aponte giggled while Polanco’s face turned red. She had beaten Polanco in a match.

Vasquez wants to see the program grow. “The ultimate goal is to create a jiu-jitsu program as a sport,” he said. He said he does not know of any other school district in New Jersey that offers jiu-jitsu.

Jiu-jitsu training is expensive. It can cost more than $100 month for dojo membership. His students get the training for free.

“They love the program. They live for it,” said Vasquez. “Afterschool recreation keeps them busy.”

The program also keeps them safe. At least in Aponte’s case, several weeks prior, she thwarted an abduction attempt. She escaped and got to safety by running to school grounds.

“It would scare anyone,” said Aponte of the incident. “It didn’t scare me as much as I thought it would.”