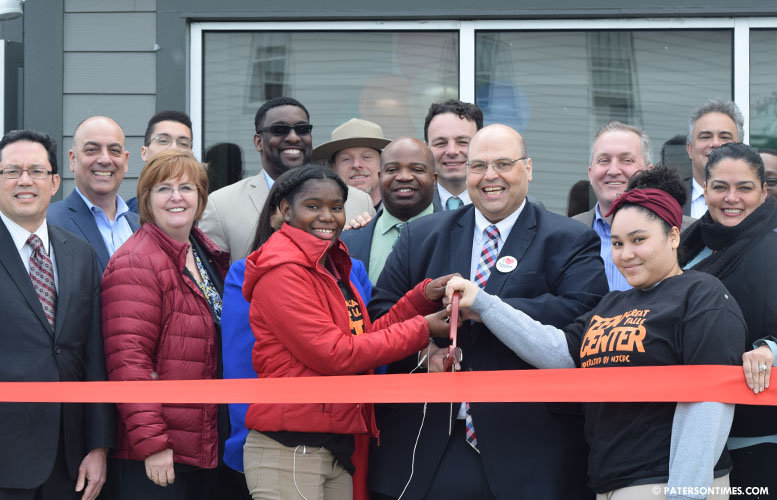 Larren Reagans and her friend Winiyah Kersey attended the opening of the Great Falls Youth Center last Friday. Both girls, sophomores at John F. Kennedy High School, plan to spend time after school at the center.

“I like the studio. I’m not too familiar with computers,” said Reagans speaking of some of the center’s offerings. The center has a recording studio, a music studio, and a computer lab, according New Jersey Community Development Corporation (NJCDC) officials.

Young people will learn audio editing, video editing, graphic design, and coding. There’s also entrepreneurship training, photography, and fashion design. These are just some of the programming available at the center. Students have a space to do their home with free printing.

Many will write their first resume, complete the Common App to apply for colleges, and fill out their financial aid applications.  The youth center has 18 computers in its computer lab and 5 piano keywords in the music studio.

NJCDC received a $985,000 grant from the NRTC program to convert the former American Legion building at 52 Front Street into the youth center. The renovation cost $800,000, according to the nonprofit. The group spent $749,900 to purchase the building. The total cost is $1.5 million.

The building has 6,000 square feet of space.

“This youth center is absolutely beautiful. It makes me want to go back in time, but I know that’s not possible,” said acting mayor Jane Williams-Warren. She was among 75 people, mostly local leaders and heads of organizations, present at the ribbon cutting for the Great Falls Youth Center.

Williams-Warren thanked Bob Guarasci, president of the New Jersey Community Development Corporation, for creating the center. For a longtime, Guarasci wanted to create a safe space for young people.

“While the center itself may not be the largest building in Paterson. I expect really big things to come out of it,” said Guarasci. “It’s going to offer a wide range of programming to help teens reach their potential.”

In 2016, he saw an opportunity and purchased the former Raymond Pellington Post #77 American Legion building. He credited his team for making the center happen on Friday morning.

A focus group conducted by the nonprofit had young people seeking a space to do their homework in groups at night, said Guarasci. On school days, young people will be able to do just that at the center, which is in the relatively safe Totowa section.

Reagans, who lives in downtown Paterson, said she plans to spend time at the center on Saturdays. When asked if she plans to walk from Church Street to Front Street, she replied, “It’s worth it.”