Paterson showcases its ‘breakfast after the bell’ program | Paterson Times 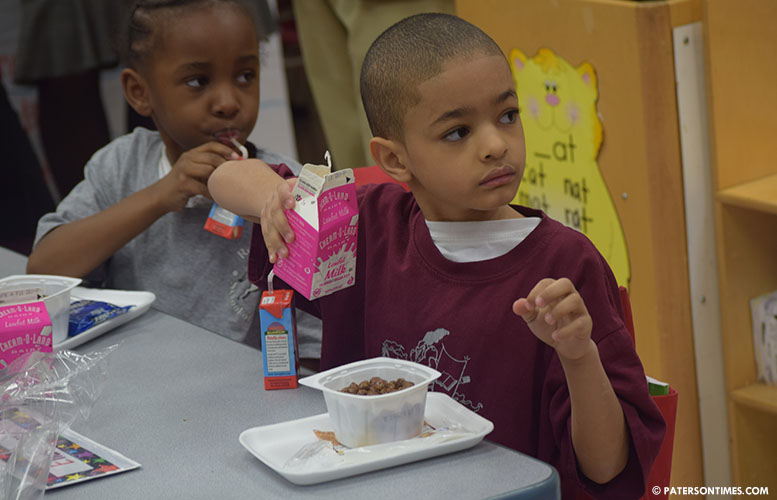 The youngsters came into Tonia Cole’s kindergarten classroom to find breakfast – Cocoa Puffs, milk, graham crackers, and a juice box – on their desks to begin the school day on a full stomach.

“It helps set the tone for the day,” said Cole. “The kids not only know the routine, but they also understand breakfast in the morning is a great way to start the day.” She uses the first 10-minute of class to feed her 17 students at School 1 every morning.

Across the district, youngsters in K-8 grades, receive breakfast in classrooms after the bell rings. Students in 9-12 grades, who are not served in classrooms, get their breakfast from “grab and go” kiosks.

“For some of our students, this could be, unfortunately, their only meal today,” said superintendent Eileen Shafer. Indeed, the city is one of the poorest in New Jersey. It has a 30-percent poverty rate.

The program has improved attendance, reduced nurse visits, and cut back on students sleeping in class. Education advocates lobbied for the program arguing hungry students do not learn. Their lobbying efforts succeeded when the district agreed to pilot the in-class breakfast program in 2012-13 at School 8.

The number of students served breakfast has increased more than three-fold since 2011-12 school year. In the 2016-17 school year, the program served 17,600 students or 69-percent of the district. This is a marked increase from the 5,700 students or 22-percent breakfast participation in 2011-12, prior to the implementation of the “breakfast after the bell” program.

“Hats off to Paterson for getting these numbers to really pop,” said New Jersey secretary of agriculture Douglas Fisher citing the increase from 22 to 69-percent.

The increase happened over a six-year period with the expansion of the in-class breakfast program. Breakfast participation went from 22 to 25-percent in 2012-13 with a single school providing in-class breakfast. In 2013-14, it climbed to 28-percent with the participation of six schools. The next year more schools joined boosting the number to 51-percent. In 2015-16, the program was fully implemented and the number climbed to 66-percent.

Repollet said in-class breakfast for youngsters lets them “jump start” their day. He liked the idea of older students delivering food to classrooms every morning for their younger schoolmates.

Shafer gave credit to Linda Reid of the Paterson Parent Education Organizing Council and Rosie Grant of the Paterson Education Fund for pushing the district to implement the “breakfast after the bell” program.

“I’m thrilled,” said Grant at the success of the program. ”It was a hard start.” School principals and teachers had to be convinced to offer breakfast in classrooms. It’s still somewhat of a hard start for some in September.

Sometimes youngsters drop food or spill milk, but it’s not too messy for Cole. “They have to get used to opening the milk and pouring the milk. Once they get the routine down, they know what to do,” said Cole.

Cole turns breakfast time into a lesson. “We do a lot of math during this time,” she said.  Students count cereal and identify shapes of containers.

“It’s the most critical meal of the day. Studies underscore having a good breakfast allows children to perform better in school,” said Diana Limbacher, deputy regional administrator for the U.S. Department of Agriculture (USDA), which funds the breakfast and lunch programs through the state. “We’re basically advancing the future of our children by making sure they have a good breakfast.”