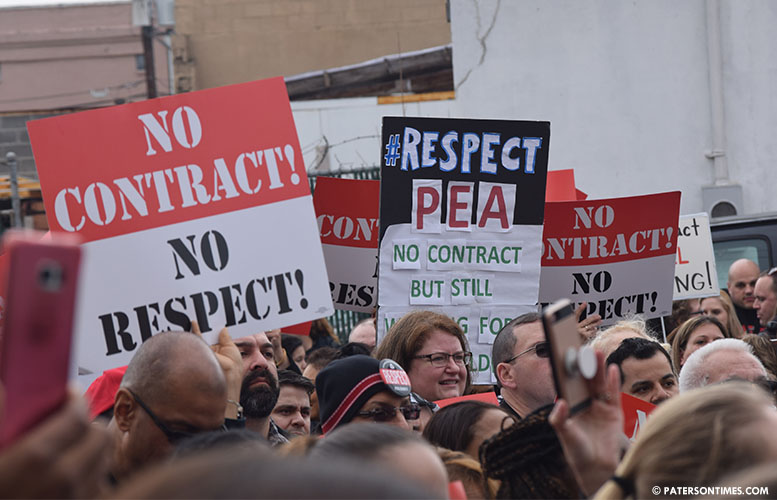 Hundreds of teachers rallied outside of the Paterson school district headquarters on Wednesday afternoon demanding a new contract. Inside the building representatives from the school district and the Paterson Education Association, the teachers’ union, met to strike a new agreement.

“We’re not coming out of that building until we have a contract,” said union president John McEntee, Jr. to hundreds of his members, before heading inside the district office to negotiate a new contract for his membership.

Teachers have been without a contract since June 30, 2017. It took both sides four years to agree on the accord that expired last year. Both sides met multiple times this year to strike an agreement. However, union officials have accused the district of coming to mediation sessions without proper preparation or intention to settle the contract.

Superintendent Eileen Shafer promised to settle the teachers’ contract within 100 days of her appointment. Union officials have been keeping count. She still has 58 days to ago, according to the union.

“I’m hopeful she keeps this promise. She has kept many other promises,” said Mercedes Davidson, a special education teacher at School 3. She went without a step increase for four years after being hired in 2009, she said.

“I can’t afford to do that again. We need to settle this contract now,” said Davidson. She was the only teacher willing to speak to a reporter at the rally. Union leaders told their members not to speak to the media.

The rally was attended by a number of community leaders. There were also union allies from Jersey City teachers’ union and the Passaic County Education Association.

“We all stand united for a fair contract,” said Sean Spiller, vice president of the New Jersey Education Association (NJEA).

“What do we want!” shouted McEntee to the crowd.

Police had to shutdown Delaware Avenue to accommodate the rally. Traffic on Getty Avenue backed into downtown Paterson.

Pete Tirri, retired president of the Paterson Education Association, described the rally as the largest he witnessed. He had been president of the teachers’ union for 42 years, he said. He was succeeded by McEntee.

“Just look at this crowd. He’s doing a terrific job,” said Tirri of his successor. He said there had to have been 1,000 to 1,500 people in front of 90 Delaware Avenue.

Union officials hope the demonstration pushes the district to strike an agreement. Pay and health insurance contributions are the key issues holding up the contract, according to union officials.