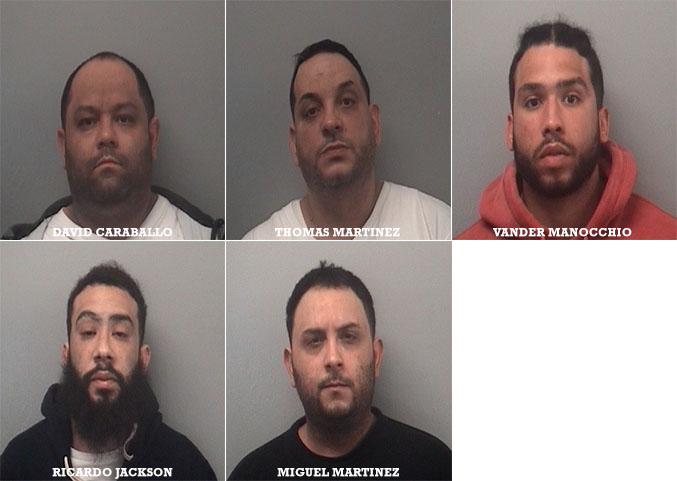 Detectives arrested five men in a drug bust on McBride Avenue seizing $100,000 worth of cocaine, $34,709 cash, and three handguns, according to Passaic County Sheriff Richard Berdnik.

Berdnik said detectives began a street level drug investigation at the intersection of McBride Avenue and Rockland Street at around 5:20 p.m. on Wednesday. A Jeep vehicle parked in front of a garage belonging to 237 McBride Avenue.

Occupants of the vehicles remained inside. A little later, Manocchio exited the vehicle through the front passenger door, and approached the garage. Caraballo opened the garage door and exited holding a black bag.

Caraballo handed the bag to Manocchio in exchange for a large amount of paper currency, authorities said.

Detectives observed Carballo get back into the garage while Manocchio entered his Jeep and left the area with detectives behind him. The Jeep was pulled over on Main and Ellison streets. Detectives confiscated over a pound of raw cocaine inside the black bag and a .38 caliber revolver, authorities said.

The Jeep’s driver Jackson and Manocchio were placed under arrest. Police confiscated $1,709 in cash from Jackson.

Detectives resumed surveillance on the garage. Caraballo, holding a black backpack, accompanied by Martinez, exited the garage. Authorities said the backpack was placed in the drunk of a BMW vehicle.

Martinez and Caraballo got inside the vehicle. Martinez sped away through McBride Avenue. Detectives conducted a motor vehicle stop on Browertown Road in Woodland Park.

Caraballo was arrested for the cocaine sale, authorities said. He had $10,000 in cash. Martinez had $870. Detectives had a K-9 search the vehicle for drugs. The vehicle was towed from the scene for further investigation.

Detectives searched 237 McBride Avenue. 50 Percocet pills and a .22 caliber revolver were confiscated. A Dodge Charger was searched at the property leading to seizure of a .40 caliber semi-automatic handgun and $22,130 in cash.

Martinez was charged with two drug possession charges and a weapons offense.