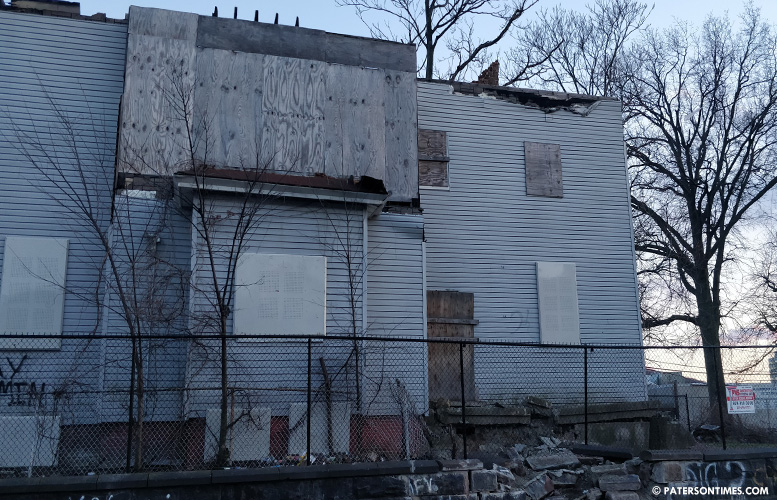 The fire damaged house on the corner of Auburn Street and Fair Street is an eyesore in the neglected Wrigley Park section. But, Brian White, a new developer from Morristown, sees something very different looking at 84-86 Auburn Street.

“I’ve really taken a liking to this house, I won’t lie to you. The yard is huge. It’s a really big house,” said White on Wednesday night. “I have an old picture of it, the house used to be incredible looking. It’s got some of the original stuff inside like woodwork and original tiles even in its current devastated state.”

White is spending $350,000 to rehabilitate the house. His plan will expand the two-family structure into a three-story building. There will be six apartments inside the renovated structure. He estimates the project will be complete in six months.

The Paterson Planning Board gave the green-light to his rehabilitation plan on Wednesday night. He received well-wishes from some board members.

“It’s an eyesore,” remarked councilman Luis Velez, who sits on the board as the city council’s representative, holding up his smartphone showing the neglected property. He recognized the Herculean task before White.

“I’m going to call you a warrior,” said Velez to White. “Because of you I think this area will be great.”

The area where the house is located is the epicenter of anti-social activity in Paterson. There are drug addicts on the block at all hours. Across the street, at a drug house, two boys were shot – one died — last year.

“It’s a rough site. It has a lot of negatives right now,” said Matthew Evans, White’s architect on the project.

White has done some work to secure the house. He installed metal boards on windows and an iron fence around the property to keep out vagrants. His iron fence and retaining wall were badly damaged when someone drove a car into it on the Fair Street side soon after installation.

“Are you planning to put security cameras?” asked Janice Northrop, chairwoman of the Paterson Planning Board.

“On all sides,” replied White. He also plans to better illuminate both the Auburn Street and the Fair Street sides of the property. Extra lights help to deter criminals.

This project is White’s first in Paterson. His company from Cranbury plans to acquire other properties in the Silk City. He bought the Auburn Street property for $80,000 last year. He is in talks to acquire the vacant lot next to this one on Fair Street.

White, 32, said he plans to use high quality materials to rehab the building. He wants to make sure his first project is done right.

“If someone takes a turn on Auburn this is one of the main houses they will see,” said White. “It could change the whole perception of someone going down that street and into that area.” He has plans to purchase more properties in the vicinity of the Paterson Train Station mainly between Broadway and Hamilton Avenue; and Straight and Lake Streets, he said.

White has had some memorable experiences since he first visited the house in May 2017. When he went inside the house, prior to buying, he found a sullen drug addict, who looked at him with suspicion.

After buying it, he had to find a way to keep the vagrants out. “For the first two months, they were climbing trees to get in over the lack of a roof — there’s no roof so they were jumping in,” said White. “They chiseled through the foundation to get around. It’s ridiculous.”

Some drug dealers at first mistook him for a customer.  ”For the first few months, people came up to sell drugs,” he said. “I still get a little bit of that, but now people recognize me. They wave at me.”

“I hope he does well,” said prominent developer Charles Florio, owner of JCM Investors. The best White can do is learn from the experience of those who have been working in Paterson for years, he said. Both men have met a couple of times, said Florio.

White should be prepared to protect his construction materials when he begins work on the project. “When he starts construction they are going to steal everything in there,” said Florio. He often hires a full-time security officer as soon as framing goes up, he said.

White can look forward to solving many neighborhood mysteries as his portfolio grows. Florio, who has been an investor in Paterson for the past decade, solved one some years ago.

“When I bought my first property, my mailbox kept getting stolen. I didn’t know why,” said Florio. His mailbox was being taken and sold to scrap yards. “I didn’t realize it, but you can’t buy metal mailboxes in Paterson.”