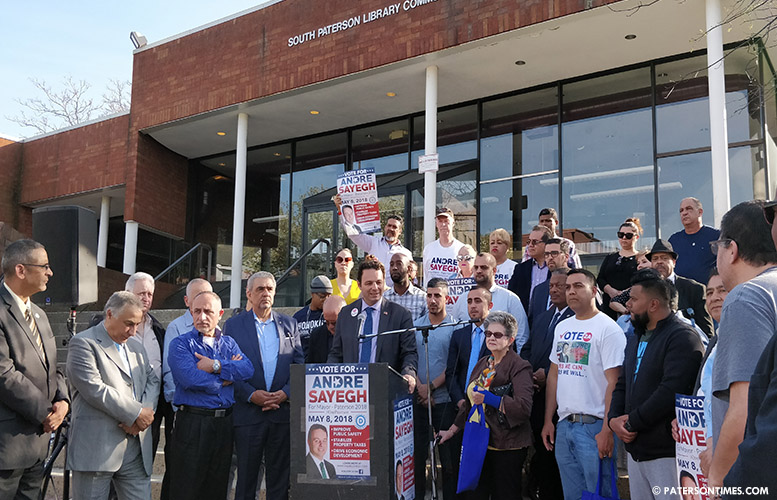 The South Paterson section is getting a police substation, according to councilman Andre Sayegh.

Sayegh said 20-30 police officers will be working out of the first floor of the South Paterson Library Community Center on Main Street. He expects the substation to become operational in mid-June of this year.

“It starts with public safety. You can’t do anything until you secure your city,” said Sayegh. “The strongest section of the city is going to get stronger because we’re bringing back the police substation.”

Sayegh said a substation existed at the library in 1981. Former public safety director Glenn Brown, who was at hand at the press conference outside of the library, said the city had to shutter the substation due to manpower cuts.

Sayegh’s opponent in the 6th Ward city council race two years ago proposed bringing the substation back to the library.

“This police substation will create a safer environment for our kids, our families, our business owners, and their customers,” said Al Abdelaziz, who unsuccessfully ran against Sayegh in 2016.

Both men fought hard for the 6th Ward council seat. However, after the election, both men patched up their relationship and began working together.

Abdelaziz said the first floor of the library has been vacant since the closure of the substation 30-plus years ago.

Kiesha Hicks, who lives a block away from the South Paterson library, said the substation is needed to maintain the public safety gains made over the years.

“There’s a lot of strip clubs here. When they let out, sometimes, it gets a little disruptive,” said Hicks, who attended the conference with her two children. “Not as much as it used to.” She hopes the substation will further reduce the disruption.

Hicks lives on Montclair Avenue which was home to the infamous Lava Lounge. She credits Sayegh for improving the area. She said there were drug dealers hanging out in front of her house.

Sayegh helped her to drive out the drug dealers, she said.

Sami Merhi owns four properties within four blocks of the library. “No security, no business. Who is going to invest their money where they know their property is not safe?” he said. “If there is no security, there is no investment.”

No police brass was present at the press conference which was billed as a campaign event. Sayegh stood in front of several dozen supporters to make the announcement.

The South Paterson substation will be the second such precincts in Paterson. In 2015, the city opened a substation on Grand Street in the 2nd Ward. The entire police motor division was moved to the old firehouse in the Stoney Road neighborhood.

Sayegh, who is among six men running for mayor, promised more substations.

“When we get to the second floor of City Hall, we’re going to bring substations to the rest of Paterson,” said Sayegh.