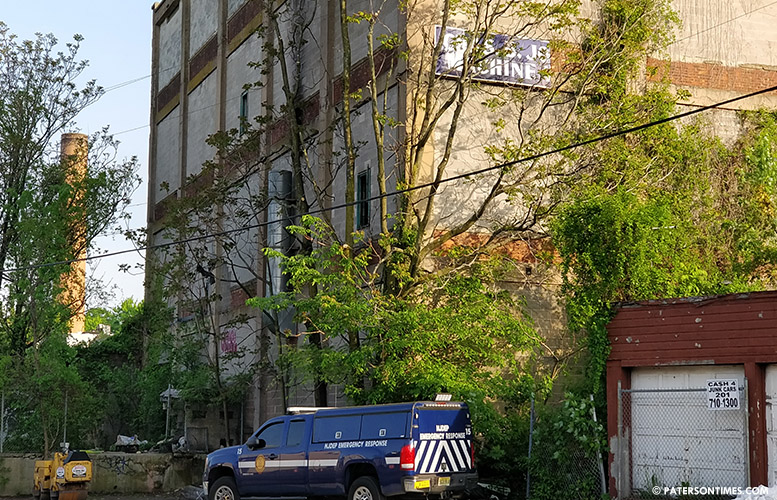 The long vacant Galaxie Chemical factory on Piercy Street, which was the site of a minor fire over the weekend, has 425 barrels containing chemicals, according to municipal and county officials.

“The DEP ‘s Bureau of Emergency Response is assisting Passaic County in inventorying materials, assessing the condition of the property and ensuring the site is secure,” said Larry Hajna, spokesman for the New Jersey Department of Environmental Protection (DEP), on Monday afternoon. “The building contains a large quantity of dry pigments and dyes as well as many drums and various sized containers of liquid materials, mostly nonhazardous. No hazardous substances were involved in the fire.”

The large facility on Piercy Street was used to manufacturer chemicals and inorganic dyes. Some of the drums are 55-gallon barrels containing such things as sodium bicarbonate, ammonia, and other chemicals.

The chemicals inside the building do not pose an immediate health concern, according to a county health official.

Municipal officials said the building is expected to be boarded up by the city’s public works department.

Saturday’s minor fire was not the first time fire officials had to respond to the site. In April, there was a fire at the building that required Passaic County and state inspectors to respond, according to county officials.

Michael Jackson, 1st Ward councilman, who represents the area where the factory is located, said the city should have gone after the company long time ago.

“The people who are tasked with oversight don’t live here. So, they don’t give a darn about what’s going on,” said Jackson. “We should have been pressing the owners.”

The building still lists the owner as Galaxie Chemical.

Jackson said he plans to ask the administration to take actions to hold the owner accountable. The firm that operated out of the building moved out of New Jersey.

The clean up for a building that covers an entire city block will be expensive, said a county official. However, there are federal and state grant monies available.