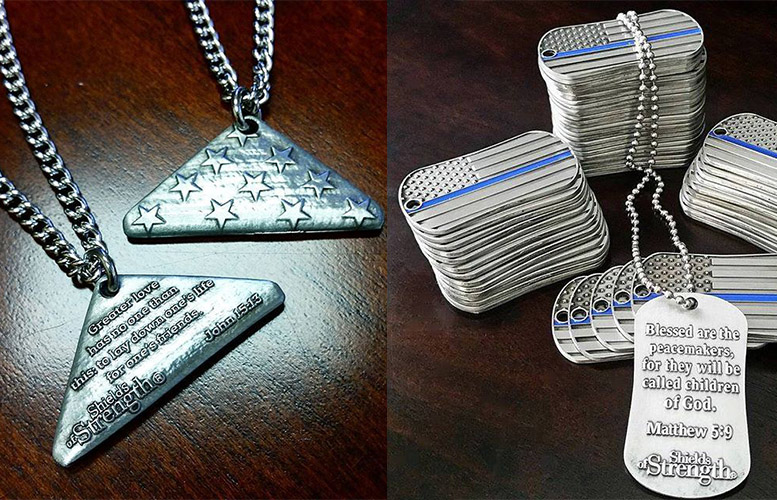 A nonprofit is sending more than two dozen “Shields of Strength” to the Paterson police force in memory of fallen police officer Tamby Yagan. The 27 shields are for distribution to peer officers, partners, and those who had been close to the deceased officer.

“We will never forget the ultimate sacrifice that Officer Yagan made and we will not forget his family. We are forever grateful for these brave men and women in law enforcement,” U.S. Army (Ret.) col. David Dodd, director of Atlanta-based nonprofit Point 27, said. “We are presenting Thin Blue Line Dog Tags to thank the officers for putting their lives on the line to protect Americans.”

Yagan died in a motor vehicle accident on Apr. 22, 2018. He his marked police interceptor crashed into a parked vehicle.

Yagan, 41, of Wayne, had been an officer for 12 years. His funeral was held at the Circassian Benevolent Association in Wayne that attracted 500-plus law enforcement officials from throughout New Jersey.

“Point 27 loves all of God’s people: Christians, Muslims, Jews, Hindu, Buddhist, all religions, and people of no faith,” Dodd said. “The words on the necklace we gave for Officer Yagan’s son are, ‘Greater love has no one than to lay down one’s life for one’s friend.’  Officer Yagan epitomizes these words perfectly. He laid down his life in his service every day, so that others might live and live peacefully. He is a true American hero, role model, and his life made such a difference in the lives of others.”

Dodd’s organization distributed 100,000 shields in 2017 in honor of fallen officers and soldiers. The group provides the shields to agencies that have lost a member.

The police department can request additional shields from the nonprofit.