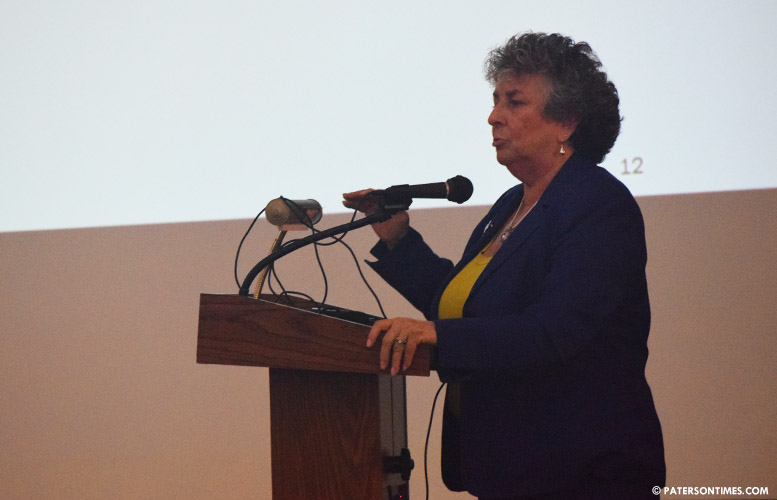 Superintendent Eileen Shafer presented a two-year transition plan that restores the reins of the district from the state to the local school board at a community forum on Thursday evening.

“Now the community has a voice,” Shafer told an audience of 37 people at the auditorium of School 25. She noted over the past 27 years, the district had been run from Trenton. Last month, the state board of education voted to return full control over to the local school board. It required the district to submit a transition plan to the state.

The plan for the most part listed the responsibilities of the school board and the superintendent under local control. For the next two years, the district will be closely monitored by the state. Shafer said the state will consider the district’s input when appointing a monitor to oversee the district.

“They will work with us. So that we have a highly skilled professional overseeing this plan,” she told the audience. “They have assured us, we’ll have input as to who that person will be, it’s not going to be someone Trenton says, ‘Here they are. Now you have a monitor.’ I don’t want someone from Trenton. I want someone who knows Paterson.”

Part of the transition includes a referendum in Nov. 2018. Voters will have to decide on the type of school board, appointed by mayor or elected.

Shafer favors an elected board.

“If we opt to have the mayor appoint, the mayor will control the district,” said Shafer. Mayor-elect Andre Sayegh was in the audience.

Prior to state takeover, the mayor appointed the school board. One questionable incident is cited in the report that justified the state takeover. William Kline first learned he would be assistant superintendent from mayor Frank Graves during a luncheon. Graves told him he was recommending Kline for appointment to superintendent Frank Napier. This incident proved “’ineffective personnel procedures” at the district.

The state had taken over Jersey City citing political interference from City Hall. No such charge was made in the Paterson takeover justification report. Instead, Paterson was taken over due to the incompetence of Napier and ineptitude of the local school board, according to the report. Napier shifted blame to the mayor.

Sayegh favors a hybrid board, some elected and others appointed by the mayor.

In her presentation, Shafer touted gains Hispanics and black students made on the Partnership for Assessment of Readiness for College and Careers (PARCC) exams. However, the district needed a waiver to regain full local control due to its low test scores.

“It takes time for students to do well on state assessments,” said Shafer. She said the state keeps changing exams.

The ever-increasing graduation rate is largely pushed by credit recovery, a controversial method schools all over the country have been using to boost graduation rates. Students, who fail to pass courses, manage to secure passing marks when put in front of a computer.

“She’s not being challenged,” said Clark of her daughter.

When Shafer took over following the retirement of former superintendent Donnie Evans last summer, she outlined an ambitious agenda to boost academics in the district. She was appointed superintendent by the school board in Feb. 2018. She is hiring 44 staff members, including librarians and teachers.

Shafer told the audience every elementary school will have art and music in the 2018-19 school year.

“The Paterson people can do a much better job,” said Shafer referring to almost three decades of state takeover. The local school board will regain full control in 2020. During the transition, the state government has the power to intervene if there’s unethical conduct or mismanagement.

Shafer said the transition plan will be submitted to the state in mid-June. She organized six forums, one in each ward, to collect input from residents. None of the residents, who attended the School 25 forum, provided input at the end of the presentation.

Shafer told the audience members they could submit their feedback privately. She has four other community forums scheduled: