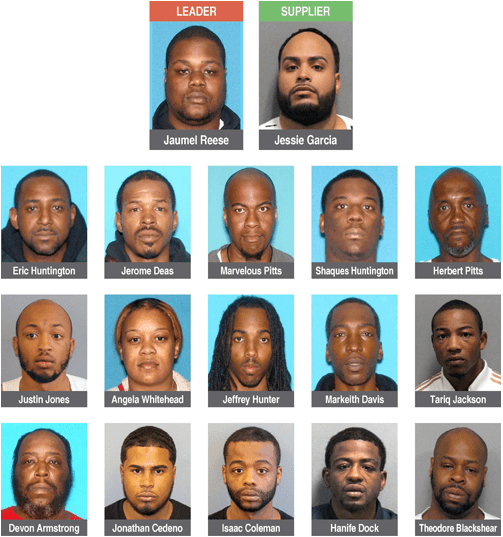 Seventeen people belonging to a drug dealing network linked to the Bloods street gang that distributed large amounts of heroin in Paterson have been indicted, authorities said on Thursday afternoon.

Authorities charged 16 others for allegedly buying heroin from the ring that operated out of the 4th Ward, bringing the total number of people indicted to 34. The indictment resulted from a multi-agency operation dubbed “Operation Pitfall.”

Reese was arrested and his alleged bulk supplier Jesse Garcia, 27, of Lodi was picked up by authorities. Authorities recovered 4,500 packets of heroin in 90 bricks during a raid at Garcia’s residence.

Police seized a handgun, hollow-nosed bullets, and over $19,000 in cash. He was additionally charged with drug, gun offenses, and money laundering.

The operation yielded a total of three guns.

A grand jury indicted 17 members of the ring in a 63-count indictment on Wednesday, authorities said. All 17 were charged with second-degree conspiracy to distribute heroin.

“This investigation really took aim at the heart of the problem, because Paterson is a major hub for heroin distribution across northern New Jersey and the open-air drug markets allegedly controlled by this Bloods set in the city’s 4th Ward have a history of gun violence,” Gurbir Grewal, New Jersey Attorney General, said. “We are collaborating in investigations like Operation Pitfall to target the drug traffickers who are fueling the deadly opioid epidemic and bringing violence to the neighborhoods of our cities.”

“This investigation is a great example of all levels of law enforcement working together seamlessly to dismantle a significant narcotics network,” Veronica Allende, director of the Division of Criminal Justice, said. “There can be little doubt that we saved lives by stopping the heroin trafficked by these gang members from reaching people struggling with addiction in Paterson and the surrounding region.”

Other alleged gang members indicted were:

“When heroin dealing is introduced into a community, gun violence is not far behind, and if you add dangerous street gangs to the equation, the effect on a city’s residents can be devastating,” said Patrick Callahan, superintendent of the New Jersey State Police, said.

The other 17 people indicted are: