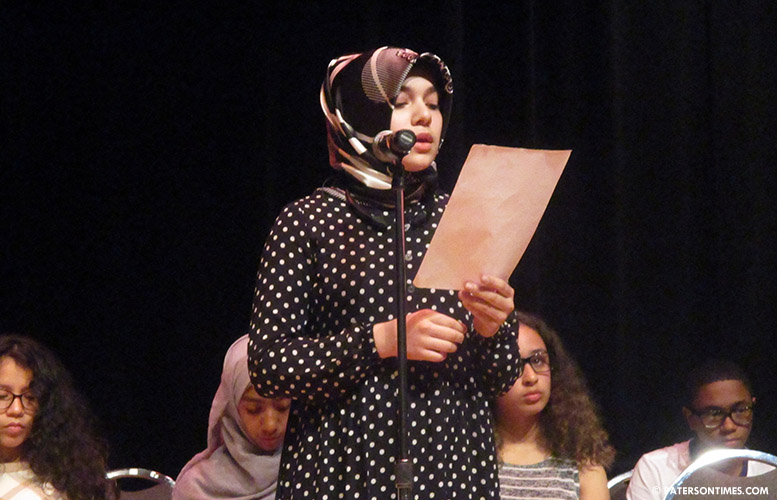 15-year old Farah Elony stood at the microphone in front of an audience of well over 200 people in the auditorium of the Passaic County Community College to read her poem “When I Faced My Fear.”

Elony, a 9th grader from Harp Academy, reached the second stanza. A pin drop could be heard in the auditorium.

“In my comfort zone I feel rumbles and shaking. The floor is vibrating under me. I don’t know what to do. The house I love and cherish with everyone I care for in it is crumbling to the ground.”

Farah’s poem was inspired by an experience she had when she was six years old. She had returned home from school.

“I turned on the television and saw that there had been an earthquake in my home country. Then the phone started ringing. It was my uncles and aunts. We were all worried about my mother. I thought she got caught. I thought I would never see her again,” said Elony after the reading on Tuesday.

Elony lived in the U.S. with her father, but her mother was behind in Haiti, she explained. Two hours, that must have felt like an eternity, passed before she learned her mother was unharmed in the 2010 Haiti earthquake.

“That was a huge moment in my life,” she said after the reading on Tuesday night.  “I love my mother and my country.”

Elony was among dozens of city students to take part in this year’s Paterson Student Poetry Contest that was open to all students in grades 1-12.

“Creativity is flourishing in Paterson,” said Susan Amsterdam, coordinator for the Theater and Poetry Project at the Passaic County Community, who moderated the contest.

Laura Boss, award-winning poet, who served as a judge in the contest, described her task as “difficult, due to so many fine poems.”

Boss had to make judgment calls on well composed works like that of Malakhi Noble, Salmah Ullah, and Semanur Kilic.

Noble, a student at the Norman S. Weir School, received a robust round of applause after reading his poem “In the Eyes of a Blind Father.” He called his father the “best dad in history.” A memorable saying of his father was part of his poem.

“The only thing worse than being blind is having sight but no vision,” Noble quoted his father in his poem. He won first place in the third-grade group.

Ullah, a 6th grader at the Paterson Academy for the Gifted and Talented at School 28, won first place among her peers. Her poem, “I am a Muslim” struck a cord with both judges and the audience.

“Why do you wear that on your head?
It looks weird, like a curtain.”

The poem transitions into some heartbreaking expressions that capture the effect the nation’s corrosive political discourse is having on young people.

“I wear the hijab because I’m a Muslim.
Not a terrorist.
Not a ‘filthy immigrant.’
But a Muslim.”

“A Muslim, born in the U.S., who prays, who reads her holy book, who goes to school, who really isn’t that different from you.”

Kilic, a 7th grader from School 9, wrote a brilliant expose on self-image and acceptance, in her poem called “Either.”

“But I have a couple of very trustworthy friends.
I may not be liked by others,
But this is who I am, like it or not.
Either accept me as who I am because
I won’t change.”

On a lighter subject, Emily Asare, 2nd grader from School 21, in her poem, reminisced about the time when her two cousins visited from Ghana.

“We had fun playing together,” Asare, who was at the contest with her father and older brother, said of her cousins’ temporary stay in the U.S. “I’m going to go to Ghana next year and visit them.”

Vanya Galvan Ortega, a 5th grader from School 9, tried her hand at Imagist poetry with her piece, “The Perfect Cup of Cocoa.”

“The surface is enclosed beneath,
A thick marshmallow mound which
melts into a gooey cloud without
the slightest sound.”

The students were encouraged to make positive change in the world through words by Jose Correa, director of instructional technology and library media at the Paterson Public Schools.

“The tongue does not have any bones but has the power to break a heart or mend one,” Correa said.