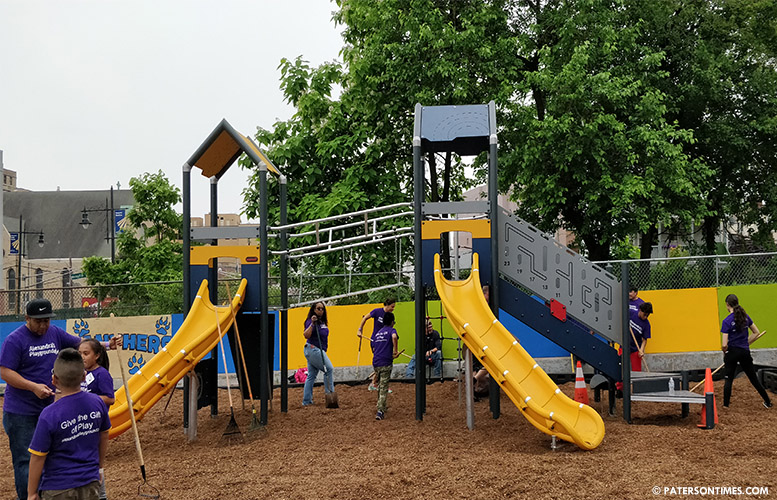 The asphalt play area at School 8 gave way to a new playground with the help of 150 volunteers on Sunday afternoon.

The new playground has slides, a supernova, and rope climbing.

Both girls were among dozens of young people to assist in building the new playground.

Alexandra’s Playground, a nonprofit, donated the playground. It has a retail value of $61,000. The Paterson Public Schools spent $10,000 to $12,000 in excavating the section of the asphalt for the playground while the New Jersey Community Development Corporation (NJCDC) spent roughly $2,000 on paint and wood panels.

This is the nonprofit’s 5th playground donation in Paterson. Overall, the organization, founded to celebrate the life of Alexandra Vitale, who untimely died in a sailing accident, donated 25 playgrounds.

The girl’s father and mother Michael and Andrea Vitale helped in assembling the playground.

“I started out today, saying neither rain nor sleet nor dark of night is going to stop Paterson from building a playground here,” said Michael Vitale. He spoke while light rain fell on the volunteers, who refused to let a drizzle stop them from building their neighborhood playground.

The volunteers came from Vitale’s nonprofit, the NJCDC, and the school district. There were parents, students, and community leaders, who came to help with the building. A young boy, who saw the playground being constructed, approached the front entrance to the play area from Main Street asking, “Could we come?”

The boy wanted to help build the playground and play at the school.

Volunteers arranged colorful panels which will be turned into murals on the fence of the playground adjoining a property that is used as a trash dumping site. One panel was painted with the school’s mascot the Panther. The panels hide the view of the garbage that lies on property.

Councilman Luis Velez said he plans to force the owner of the vacant land to clean up the trash, mostly boxes and an old Jose “Joey” Torres campaign sign.

Mayor-elect Andre Sayegh thanked the Vitale family for donating the playground. “If I were mayor today, I’d be presenting this family with the key to the city for what they have done,” he said.

Sayegh will be able to give them a key to the city after Jul. 1.

Young people from the neighborhood will be able to use the playground even after school ends, according to Sham Bacchus, principal of School 8 on Chadwick Street.

Both Leslie and Ramos, the 5th and 3rd graders, plan to use the playground afterschool and on weekends.

“I love it. My kids love it,” said Bacchus of the playground. He said the school had been waiting for two years for a playground.

The school has 526 students in K-8 grades, said the principal. The playground will be open for young people on Wednesday – poured concrete has to dry first. 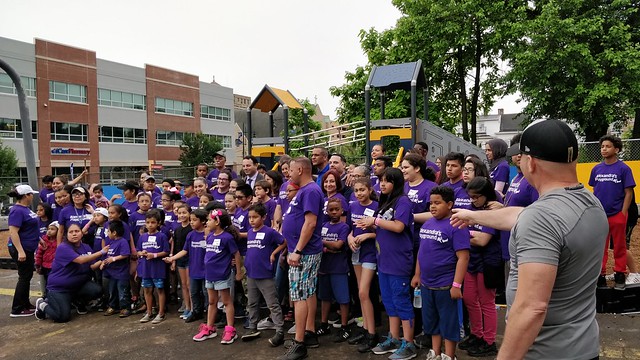