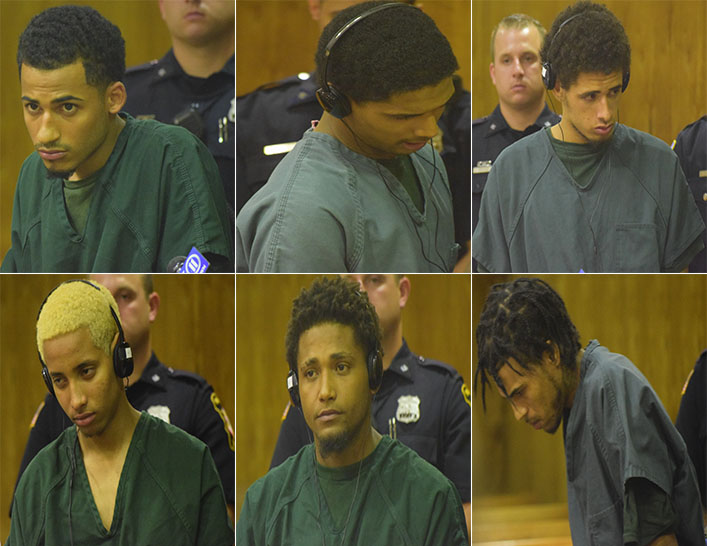 Passaic County assignment judge Ernest Caposela on Tuesday afternoon ordered the six men arrested in Paterson over the weekend for the gruesome machete murder of 15-year-old Lesandro “Junior” Guzman-Feliz in the Bronx be extradited to New York.

Each man, represented by his attorney, waived his right to an extradition hearing. Five of them needed Spanish interpreters.

Muniz of Paterson was arrested on Sunday afternoon by the Paterson police. He was hiding out at a house on East 24th Street and 6th Avenue controlled by the Dominican street gang, the Trinitarios or 3ni, a violent group based out of New York City.

Police arrested the other suspects — Rodriguez, Taverez, Rivera, Fernandez, of the Bronx, and Martinez, of Freeport, NY — at the same house that was packed with people. Each was picked up on an outstanding fugitive warrant out of New York, according to the prosecutor.

The gang killed the boy in a case of mistaken identity, according to family members. Another boy, who had similar appearance to the boy killed in the attack, was allegedly in a sex tape that circulated on social media. The female in the tape was the sister of one of the suspects, according to news reports.

Gang members apologized to the family for the mistaken killing.

Guzman-Feliz was dragged out of a grocery store in the Bronx late Wednesday night last week. Video footage shows him repeatedly being hacked by a machete wielding suspect. He ran to a hospital two blocks away while badly bleeding from the wounds. He later died.

The courtroom was packed with news cameras and reporters. At the hearing, five of the six suspects kept their heads down.

Caposela had to order Fernandez, who did not need a Spanish interpreter, to look up at him while speaking.

The six suspects will be held at the Passaic County Jail until authorities from New York pick them up, said the judge.