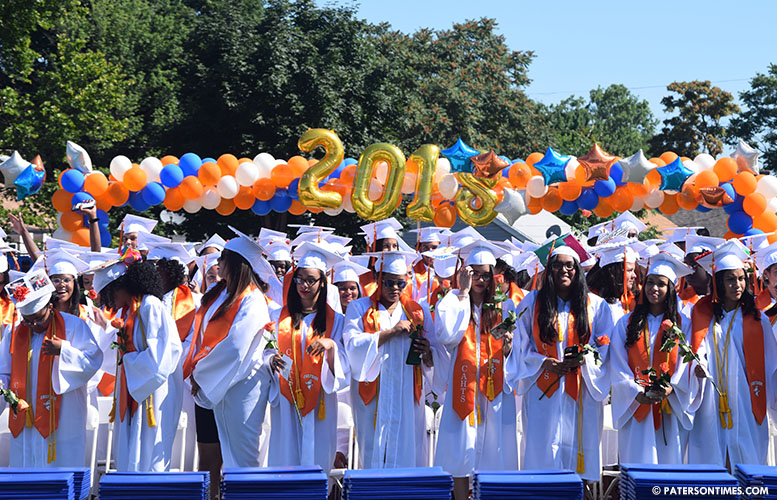 Enmy Almanzar barely spoke English when she entered the eighth grade. She was an undocumented immigrant with an uncertain future in the U.S. She was living at her uncle’s in Paterson, far away from her mother in the Dominican Republic and father in New York City.

Almanzar, 17, shared some of her, hitherto, secret struggles with her classmates during her valedictory speech in front of a thousand students and their families during the Eastside High School graduation ceremony.

“I was continuously being judged due to my accent and background, but that did not deter me,” she said during the moving address at Bauerle Field. “I know what it feels like to be an outsider and to feel powerless, but this turned out to be a gift. It just made me stronger and more determined to be successful.”

She stood proof that undocumented immigrants are “viable” men, women, and children. “Immigrants, undocumented or otherwise, are teeming with hopes and dreams just like you. We are your neighbors, your friends, your shopkeepers trying to live the American dream,” she said.

Almanzar saw it as her duty to speak up for the increasingly vilified undocumented immigrants. She, like most Americans, was upset at her adopted homeland for separating families at the Mexico-United States border.

She told her classmates if she could overcome all of these challenges so can they. She has since gotten her papers, she said. Almanzar, who attended a summer program at Harvard University, is heading to the American University in Washington D.C. in the fall, she said.

Almanzar is among 1,142 students to graduate from the Paterson Public School District’s 12 high schools this year. Most of the graduates will be attending college in the fall. They will be attending 343 different colleges throughout the U.S.

“It takes time to understand the importance of this day,” said superintendent Eileen Shafer to the students. “Today marks the end of a short journey and the beginning of another.”

453 graduates will be heading to four-year schools while 512 are bound for two-year schools. The students received $13.11 million in scholarships, according to the school district.

Donnell Shearin’s son received his diploma from the School of Information Technology at Eastside High School. His son will be heading to the Passaic County Community College in the fall, he said.

After two years, Shearin’s son will transfer to a four-year college, he said.

“Education really starts at home,” said Shearin after watching his son walk on the artificial turf. “I can’t put all the blame on the school. I can’t talk bad about the school.”

The school district’s graduation rate has been soaring over the past years. Last year, it climbed to 88-percent. Some have criticized the district for its over-reliance on credit recovery and the portfolio method to boost graduation numbers.

Some students struggle in four-year colleges. School board president Oshin Castillo, when she campaigned for her seat three years ago, said the education she received at the district did not fully prepare her for college.

At the ceremony, Castillo urged graduates to work hard, succeed in life, and give back to their community.

“There are enough lanes in this world for all of us. Get there. Forge a path. Pull someone up with you,” said Castillo. “Come back to Paterson and help those students, that like you, went through struggles and adversities. You can show them, just like you, they can do it too.”

For the first time since 2012, at the request of students, the district held the graduation ceremony, for all three Eastside High School academies — School of Culinary Arts, Hospitality & Tourism; School of Government & Public Administration; and School of Information Technology — at Bauerle Field.

“I would like to see it continue,” said Edgard Nieves, principal of the School of Culinary Arts, Hospitality & Tourism, who emceed the graduation.

The ceremony ended with a rendition of the famous Eastside High School alma mater. 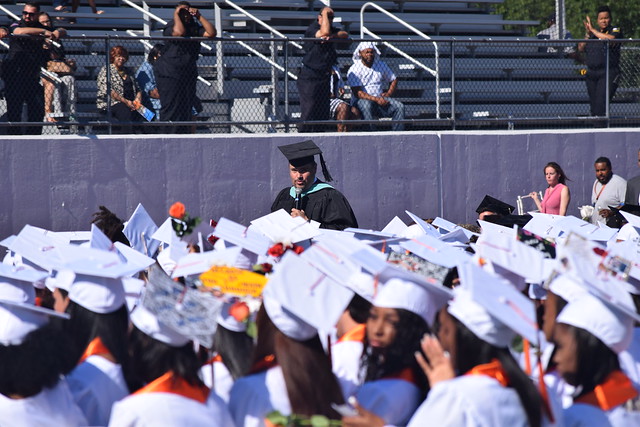