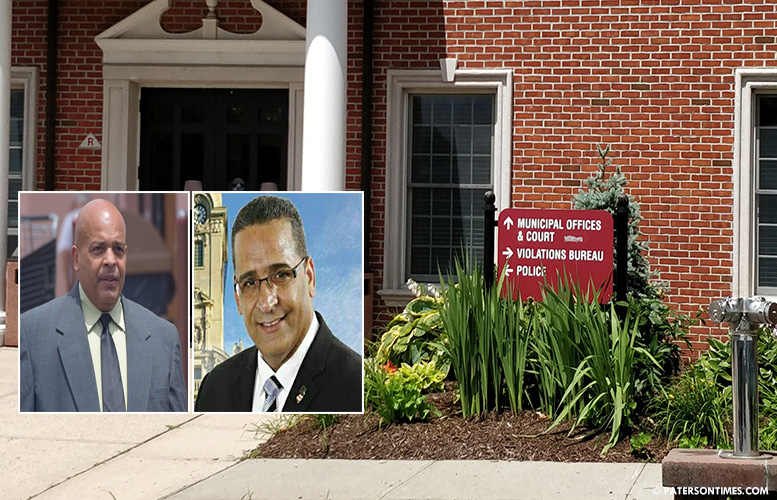 Former school board member Juan “Mitch” Santiago dropped his municipal court complaint against councilman Luis Velez on Thursday afternoon. He had accused Velez of spreading falsehoods and slandering him ahead of last month’s municipal elections.

Santiago appeared at the municipal court in Little Falls for a probable cause hearing. A series of events at the court forced him to drop the case. Almost 100 people waited in what felt like 100 degrees inside the courtroom. A judge appeared late. While the judge read the boilerplate message informing those before him of their rights, a fire alarm went off forcing everyone out of the building.

Ten minutes later, police gave clearance to visitors it was safe to re-enter the building, but they would have to empty out their pockets and be scanned with a metal detector again.

Santiago approached court officials before leaving to drop his complaint against Velez. The complaint was transferred to Little Falls due to conflicts — Velez (pictured, right) is a councilman and Santiago (left) is a municipal employee.

The complaint stemmed from a Facebook message that was purportedly sent by Velez telling voters to not to cast their ballots for Santiago. “Do not vote for Pedro [Rodriguez] and his group,” the message read, “especially Juan M Santiago has a history [of] domestic violence and lost his job because of the [sic] fact.”

Santiago was among a group of 14 people running for three at-large city council seats. He finished sixth place.

“Probably, he knew it was going nowhere,” said Velez on Thursday afternoon when told Santiago dropped the charges. “That’s time wasted with a bogus allegation.”

Velez denied he had slandered Santiago.

“It’s not my way to do politics. It’s not my style. I have family too,” said Velez.

Santiago said he is focusing on his run for the 6th Ward council seat vacated by mayor-elect Andre Sayegh.