Andre Sayegh was sworn in as the mayor of Paterson on Sunday afternoon, becoming the first Arab-American to hold the city’s highest office.

Sayegh’s longtime political mentor, Rep. Bill Pascrell, administered the oath of office. Following his oath, Sayegh delivered a 12-minute inaugural address painting an optimistic vision for the city he will lead for the next four years.

“Paterson, we were waiting to happen. Now, we’re working to make it happen,” said Sayegh, 44. He recognized he has to make the city safer to attract businesses.

Sayegh plans to deploy 24 new police officers this month. He told the crowd of over 400 people in the auditorium of International High School a new group of officers will be sworn in later this month to boost the ranks of police.

He said the new state budget has $11 million more in aid for the city. The city last fiscal year received $27 million in transitional aid from the state.

Both governor Phil Murphy and lieutenant governor Sheila Oliver promised to aide in the city’s rebirth.

“Paterson’s best days are in front of us,” said Murphy in a brief speech.

Sayegh promised a revived Great Falls and a hotel in the city.

Sayegh also plans to run a citywide campaign in two years to ensure every Paterson resident is counted for the U.S. Census. Municipal officials have long complained the city has over 175,000 people whereas the Census count shows only 147,000.

Sayegh appeared to promise a fix to the city’s image problem that sometimes leads to poor treatment of its residents in the surrounding communities.

“I’m tired of Patersonians being looked upon as second class citizens,” said Sayegh. “I’m tired of being laughed at, left out, and looked down upon.”

Sayegh is entering office at a tough time in the city’s history. Over the past 18 years, two previous mayors – Martin Barnes and Jose “Joey” Torres – left City Hall in handcuffs. Torres was sent to prison late last year.

While serving on the council, Sayegh was a constant critic of the disgraced mayor. Sayegh represented the 6th Ward for 10 years. He will be wrestling with big problems over the next four years.

The city has racked more than $141 million in debt, largely due to Torres’ profligate spending. Its borrowing capacity has been reduced to $80 million. His administration is starting Jul. 1, first day of the fiscal year, with a $1.3 million budget deficit.

Sayegh campaigned on making neighborhoods safer by addressing quality of life problems like loud music. He has vowed to hire more police officers and set up substations throughout the Silk City. He has been lobbying the Murphy administration for more funding.

Sayegh, who voted against tax increases over the years, has to attract development to the city to avoid passing on annual tax increases to homeowners. He has submitted six projects that will be funded by $130 million in state tax credits.

Sayegh also may have to deal with a hostile City Council.

“If we’re going to propel Paterson forward towards progress and prosperity, we have to be less combative and more collaborative,” Sayegh told council members.

Sayegh is the son of Middle Eastern immigrants, Syrian mother and Lebanese father. He was raised by his mother. He is married to Farhanna Balgahoom. Both have two young daughters and a boy is on the way in August.

Sayegh’s speech took an emotional turn when he recognized his ill mother in the audience. 10 years ago, his mother was diagnosed Alzheimer’s disease.

“We almost lost her last year,” said Sayegh of his mother.

The mother, in a wheel chair, lived to see her son, who twice lost running for mayor, take office. 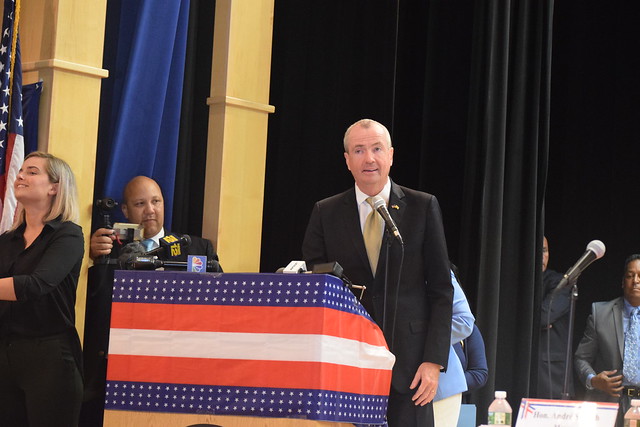