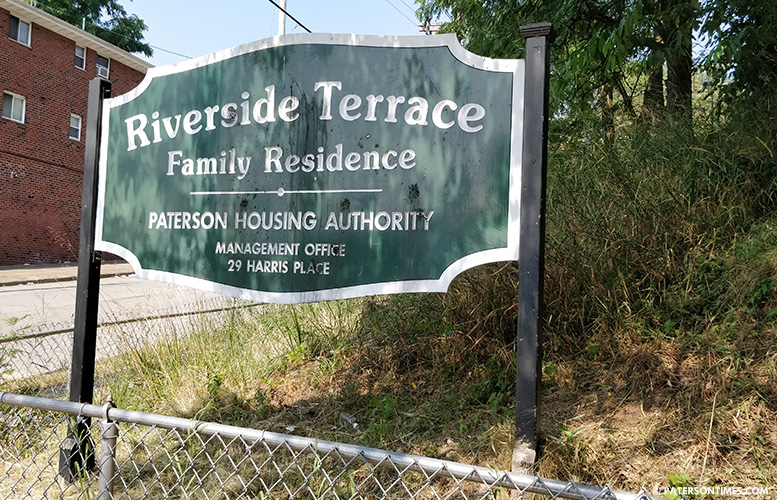 The federal government has given the city the green light to demolish the crime-ridden Riverside Terrace Housing Development that was constructed following World War II to provide housing for returning military veterans and their families in the northeast of Paterson.

Irma Gorham, executive director of the Paterson Housing Authority, said she received approval from the U.S. Department of Housing and Urban Development last Friday. She expects to relocate the 132 people that still reside in the run-down housing complex in Nov. 2018.

Demolition is expected to begin in Jan. 2019, she said after a press conference at the development on Tuesday morning.

“It’s a little sad. We look at this site as being homes for individuals over long periods of time. We had many folks that came through this development who have become lawyers, judges, athletes, and elected officials here in town,” said Gorham.

Gorham had expected to demolish the massive 300-unit housing project late last year to make way for a series of townhouses. However, she hadn’t received approval from the federal government.

Roizman Development of Pennsylvania, which built the Smoot Village and the housing complex on Belmont Avenue, will lease the 17 acres of land from the Paterson Housing Authority for 99 years for $3.2 million.

Under the agreement, the Paterson Housing Authority will be able to buyout the developer after 15 years.

Israel Roizman, owner of Roizman Development, provided estimates for construction and demolition costs. He said the low-income housing project will cost approximately $80 million. He provided some estimated cost breakdowns, but was reluctant to discuss financials for the project.

Roizman cautioned the numbers are estimates. Funding is coming from mostly government sources including New Jersey Housing and Mortgage Finance Agency (HMFA). He said his firm may have to pitch in an estimated $7-9 million.

Once completed, the series of townhouses will have 245 units — 165 for families and 80 seniors, according Gorham.

Gorham said the current residents being relocated will get first right of refusal to return to the new townhouses.

Pascrell noted the rebirth of the former Alabama Projects and the former Christopher Columbus Housing Projects. Both of these huge housing complexes were demolished to make way for desirable townhouses.

Both of the previous housing development were crime magnets.

“Once we’re finished transforming this neighborhood, people will be proud of what they’ll be seeing and where they will be living. It will have a ripple effect throughout this section,” said mayor Andre Sayegh.

Pascrell, a former mayor of Paterson, resides in the Riverside neighborhood.

Roizman estimated the project will be completed by 2021.