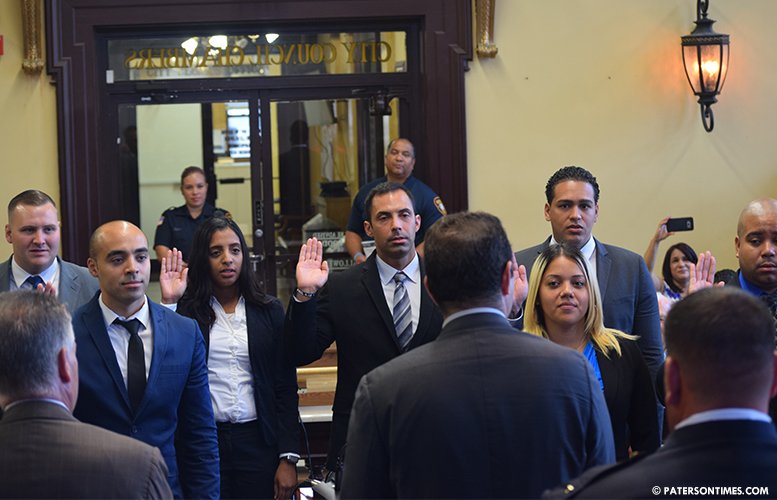 The new officers were sworn in during a brief ceremony at City Hall in presence of their family members and friends by mayor Andre Sayegh.

“It’s a proud moment for me because this is the first class I’m swearing in as mayor. What does this mean about our first class? You have to be first-class,” said Sayegh. “For the next six months, you will be tested. Why? Because you need to be trusted.”

Trust, integrity, and ethics were the keywords at the ceremony. Several police officers have been charged with violating Patersonians’ civil rights this year.

“The times are a changin’,” said police chief Troy Oswald, quoting Bon Dylan, the Noble Prize-winning singer-songwriter, who wrote a song about Paterson. He has been changing the police force by going after corrupt and incompetent officers since his appointment earlier in the year.

“What I’m asking all of you is simple: do the right thing even when no one is watching,” said Oswald, providing the recruits a primer on ethics and invoking film director Spike Lee. “That means, park legally, be on time, work hard, be nice to people, be courteous to people. And then also, when someone is wrong lock that person up.”

Oswald’s quoting of Lee and Dylan is no different than his predecessor, William Fraher, invoking Swiss psychiatrist Carl Jung. Ironically, the Dylan song about Paterson painted the police force as corrupt and unjust. He made it evident that he was quoting from Dylan’s song “The Times They Are A Changin’” and not “Hurricane.”

The new recruits will go through training at the Bergen County Police Academy, where they will learn the basics of policing. Each will be provided sensitivity and diversity training, important in a city with a majority Hispanic and black population, two communities that have come to mistrust police.

Each will start with a $33,000 salary and generous government benefits; however, after few years of service, they can expect higher wages. The new officers will be deployed in November, said police director Jerry Speziale.

“The oath you take today comes with a promise that you must always keep. To hold yourself to the highest standards of our expectations; and to live your lives, both publicly and privately, in a way that neither demeans nor betrays the very trust that’s been placed in you,” said Speziale. “For the police to have any authority, at all, over the community they serve, the people must believe your goals remain principled and your character unquestioned.”

Speziale invoked the Golden Rule and the categorical imperative to urge the new recruits to treat others as they would like to be treated themselves.

The new class boosts the number of officers to 421, barely keeping up with losses. Police have lost members due to the FBI’s corruption probe, retirements, and one tragedy.

“There is honor in that uniform. It’s what you do in that uniform that makes you honorable,” said Sayegh before having the recruits raise their hands to swear them in.

Police officers sworn in were: