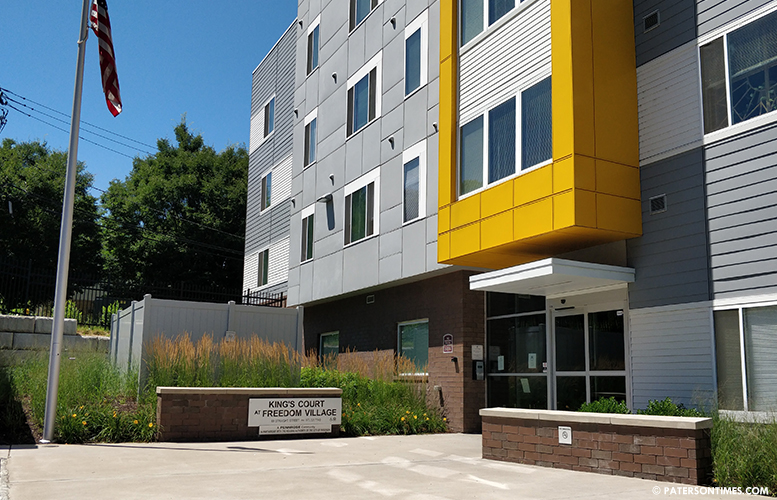 A resident of the Freedom Village housing complex has filed a lawsuit against the Paterson Housing Authority that seeks $15 million in damages, according to documents filed in federal court on Wednesday.

Christopher Delorenze, a veteran, claims he had been complaining about other tenants smoking outside, beneath his apartment window exposing him to secondhand smoke. When he complained to Pennrose, the management company for Freedom Village, he claims he was retaliated against.

He alleges the company brought him up on “inaccurate, made up” complaints for walking around shirtless in his apartment in the summer time with the door open to silence him. “This conduct not being banned, and he being allowed to do so in his apartment,” reads his lawsuit.

“Others in the complex acted this way but they were not warned, because they were Hispanic or Black,” reads the lawsuit.

The complaints against his fellow tenants invited verbal and physical harassment from some of them, claims the lawsuit.

He claims the tenants came into his personal space and threatened to physically hurt him. He could not get meals from the common cafeteria due to the verbal and physical harassment, according to court documents.

Delorenze complained to Freedom Village and Pennrose management. Instead of addressing the problem, both blamed him, his lawsuit claims.

“They always took the side of the Hispanic and Black residents but ignored Mr. DeLorenze because his is Caucasian—one of less than a handful of Caucasians living at Freedom Village,” reads the lawsuit. “Because of the conduct by Freedom Village, its Board of Directors, and Penrose [sic] management, Hispanic and Black residents are emboldened to act brazenly toward Mr. DeLorenze—knowing that they would not be censured, but Mr. DeLorenze will be.”

A representative for Freedom Village could not immediately be reached for comments.

Delorenze, who receives Section 8 rental subsidy, complained to the Paterson Housing Authority to intervene. He claims the agency did not take any steps.

“We’re alleging he was not treated fairly,” said David Schlachter, attorney for Delorenze. He alleged the Freedom Village complex has fights in the hallways and it’s like the “patients run the asylum.”

Schlachter placed most of the blame on Pennrose and the board of directors at Freedom Village.

“We haven’t been served,” said Irma Gorham, director of the Paterson Housing Authority, on Wednesday morning, when asked for comments on the lawsuit. When asked about his claims, Gorham said, “We tried helping Mr. Delorenze.”

The agency referred him to Passaic County to assist him in finding housing elsewhere. He claims he is being wrongfully evicted from the complex.

Both the complex and Delorenze had a dispute in Landlord Tenant Court. A settlement followed in January, as part of that agreement he has to vacate by Jul. 31, 2018. He claims the agreement was breached because the complex did not enforce the no smoking rule and prevented him from bringing up issues to management.

He claims he was stopped from getting meals, instead, staff brought it up to his apartment, often two hours late when it was cold and soggy, according to the lawsuit.

The veteran is seeking $5 million for civil rights violation and $10 million for emotional distress, according to the lawsuit.