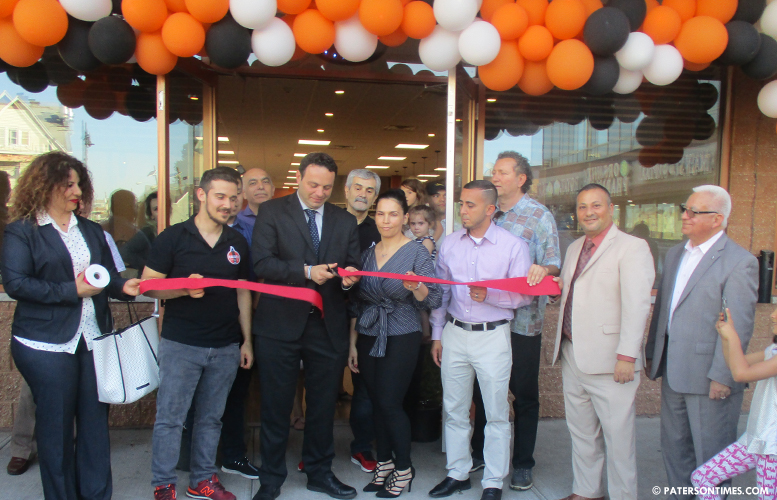 Colorful balloons were draped over the awning in front of the restaurant. Community officials, residents, friends and neighbors cordially greeted one another with handshakes and smiles. The distinct, pleasant aroma of meat grilling filled the air. With walls painted a pastel, light brown, traditional and contemporary Turkish music provided a relaxed ambiance. All the while, patrons were being served dinner at comfortable booths as well as small tables with chairs.

Thursday evening’s setting marked the grand opening for the Galata Butcher Deli Grill at 1010 Main Street. Customers described the eatery as a “a tri-service that offers a dine-in, meat shop, and deli.”

Felix Akpinar and his daughter, eight-year-old Stella Akpinar, made the trip to Galata from their home in Wallington.

“I’m Turkish. I came here to eat Turkish food that I cannot make at home,” Akpinar said. “I came before tonight’s grand opening and sampled the food. It was so good I came again tonight to lend support.”

“This is great,” said Ahmad Matari, 58, while enjoying a meal. Matari, who is of Palestinian heritage, grew up in Paterson. He and his wife, Shoroua Matari, now reside in Montville. Both were glad to have stopped at the grand opening.

“When we go out to eat, we usually order Mediterranean food,” Matari said. “I grew up eating Arabic food. I was in the area and saw that it was the grand opening.”

Galata is the latest addition to the growing restaurant scene in South Paterson, home to some of the best Middle Eastern restaurants in New Jersey.

Serhan Belgi and his wife, Linda Belgi, are the proud owners of the new restaurant. Belgi, 32, patterned both the cuisine and atmosphere around his native country of Turkey. Also featured is food from Albania, Linda’s home.

Experiencing Galata is both a culinary adventure and lesson in history.

“The name Galata is from a famous landmark in the city of Istanbul in Turkey,” Serhan said. The Galata Tower was built in the 14th century as an observation point to defend the city. Two striking paintings of the popular tourist attraction hang on opposite walls of the Galata dining area.

In order to master his craft, Serhan attended butcher school at the age of 22 in Turkey. Now retired, his father Emrullah Belgi, worked in Turkey as a businessman while Serhan was growing up. His mother ran a coffee shop. Serhan credits his parents for encouraging him to branch out on his own.

“We lived in the city of Adana,” Serhan said. “There I learned to cut meat and clean the utensils. Here, at Galata, we clean our knives and cutting boards regularly, throughout the day. I am very proud of the city from which I came.”

Following the customary pita bread with dipping options of humus, baba ghanoush, and mixed salad, many diners selected a traditional, tasty, Turkish appetizer on opening night. Borek is a general Turkish term for pastries. Cigar boreks are circles of thin bread, pan fried in light oil, filled with spinach and cheese, and then rolled up. The cylindrical treats may be dipped in a strawberry sauce for added flavor. 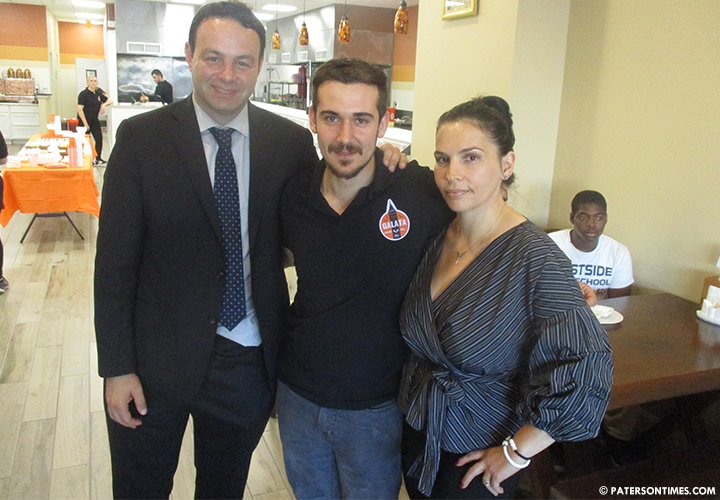 Mayor Andre Sayegh with the owners of the new Galata Butcher Deli Grill, Serhan and Linda Belgi, at the restaurant’s grand opening.

For a meal nightcap, customers may choose to sip on flavorful hot tea served in delightful, small glass cups. The traditional guilty pleasure and dessert, Baklava, is also an option.

With eight years of previous cooking experience, 34-year-old Yakup Tocgun has lived in the United States for only two months. The Galata head chef said in addition to chicken chops and meatball kabobs, one of the most popular entrees for the evening was the Adana Kebab. Served on a skewer, meat, such as lamb, is charcoal grilled over an open fire for all to see. Tocgun said that Adana Kabob originated in its namesake city in the 1930s. Hesitant to reveal his secret recipe, Tocgun described his flavorful masterpiece as, “a little spicy, full of flavor and a lot of juice.”

On hand for the evening’s festivities, all the way from Pennsylvania, was Ardian Istrefi, Belgi’s nephew. Dining with family members, the 18-year-old ordered not one plate of Adani Kabob, but two.

“These are so good I had to order them twice,” Istrefi said.  “They go well with the rice and pita bread. They are just the right texture.”

“This is a great day for Paterson,” the mayor told the gathering. “I plan on eating here often with my family.”

Sayegh described his entrée of chicken kabob as “delectable.”

“I like Galata because it’s both a restaurant, a deli, and a butcher shop. It’s a one stop shop. You can both dine in and take lamb chops home to grill,” added Al Abdelaziz, newly appointed 6th Ward councilman.

Galata is open from 9 a.m. to 11 p.m. Breakfast, lunch, and dinner is served. Take-outs and walk-ins are welcome.

“I feel at home here. The relationship between the deli’s owner, the staff, and the customers is good.  That is very important,” said Akpinar. 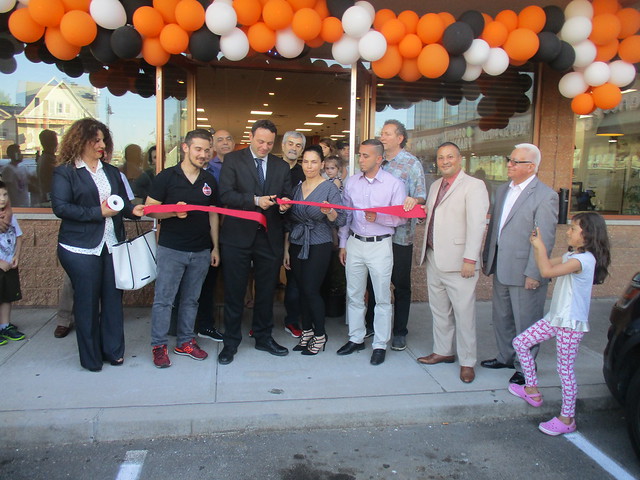