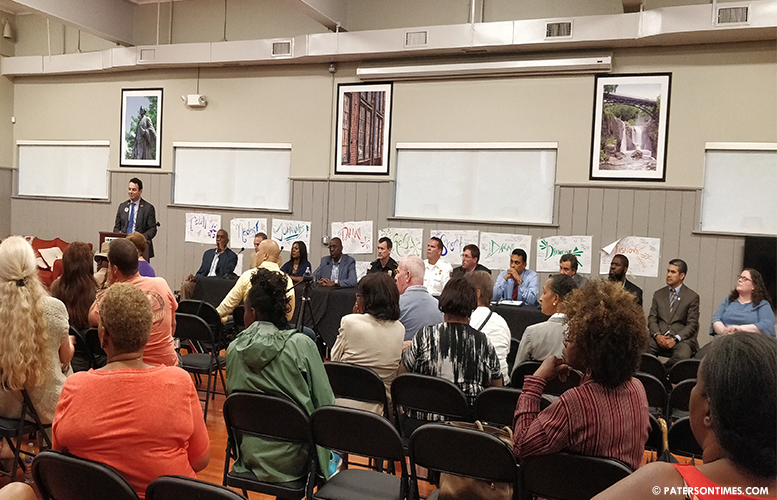 Mayor Andre Sayegh introduced members of his administration to residents at a town hall meeting on Wednesday evening.

Fifty people attended the forum at the new Great Falls Youth Center on Front Street. Sayegh introduced his team members. Each member was allowed to give a brief speech at the gathering.

Some residents wanted to know what the administration would do to address acute summer problems like loud music.

Carol Monroe got a chance to directly address police director Jerry Speziale and chief Troy Oswald about a festering problem in the Hillcrest section. She said a group has been blasting music on Chatham and Lexington Avenues.

“These people have been doing it for five years,” Monroe told administration officials. “I’m tired.”

Oswald said there’s a quality of life car that is tasked with addressing problems like loud music.

A second resident said he submitted a form on the city’s website seeking help to address loud music on his block.

“I called police twice. Nothing has changed,” he told officials.

Business owner TShon Wells moved from Haledon. He wanted to know what resources are available for him to grow his business.

“Come on down and meet with us,” said economic development director Michael Powell inviting the entrepreneur to his office. He said his goal is to assist small business to expand and create jobs in the city.

David Garsia, owner of the Art Factory, wants to hire Paterson residents, but has been having difficulty finding people with the needed skillsets.

He said he knows there are residents with those skills, but hasn’t been able to reach them. For example, he needs to hire some drivers for the new trolley service.

“How do I find them?” asked Garsia. He employs 17 people, mostly Paterson residents.

Powell said the Passaic County Social Services Office and the Workforce Development Board of Passaic County can help identity people in need of jobs with a particular set of skills.

Paterson residents are hard to reach via the internet. A third of households lack internet connectivity. It’s also difficult to reach them via newspaper ads. Some businesses manage to recruit local residents by posting help wanted signs on store fronts.

Some thanked Sayegh for appointing a diverse cabinet.

“I appreciate the diversity in the administration,” said Regana Bracey. She said the team reflects the community. “We’re going to work you to death,” she joking told the cabinet.

The mayor promised to be responsive to residents’ concerns.

“We want to have a responsive administration,” said Sayegh.

Sayegh has a second forum to introduce his team at School 25 today. Meeting starts at 6 p.m.