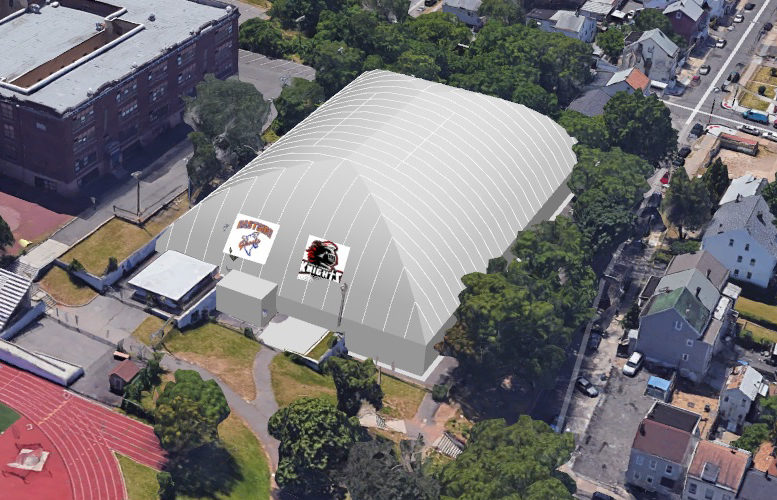 Prominent developer Charles Florio pledged to cover 10-percent or $450,000 of the cost for building the multi-sports dome while challenging other moneyed developers to step up to the plate.

Florio’s pledge has a key stipulation. He set a deadline for school board member Emanuel Capers to raise the other 90-percent of the funds prior to cashing his pledge.

“They have one year to do it,” said Florio.

“That’s totally understandable,” said Capers of the condition. “That’s our timetable as well.” He has created a 11-person committee to oversee the fundraising efforts.

Capers said he is in talks with two NFL stars to convince them to contribute to the project. He is reaching out to other individuals with the means to donate to the project, he said.

“Maybe this will send a clear message to other millionaires in the city. What have they invested in the city?” remarked Florio. He named Alma Realty, owner of the Center City Mall and the Riverview Towers, and BlueOnyx which put a bid for the Paterson Armory.

“There’s no reason they can’t contribute. It’s time to help out the community that outsiders come into and make millions of dollars. A lot of these activists are actually right about what they say about these developers,” said Florio. “They come from outside Paterson, make millions of dollars, and they don’t give back one nickel. You really can’t say that about me. I’ve been showing my checkbook.”

Florio, who owns more apartments than the Paterson Housing Authority, has built a track record for donating tens of thousands of dollars to local causes – ethnic parades, recreation programs, and local organizations.

“I believe in Paterson. I believe in the kids,” said Florio. His stinging attack did not spare local elected officials.

Florio suggested school board members and city council members try to raise funds as they do to fund their campaign during election time.

“I’m sure they can get together and the very least do some fundraising,” he said. He criticized the school district for “underselling” the old School 5: if they had not undersold the building, they would have had some money for this project, he said.

The project has the support of both mayor Andre Sayegh and superintendent Eileen Shafer. Sayegh has shown interest in helping Capers raise funds for the project.

Capers faces the daunting task of raising almost $5 million in 12 months. Florio said it’s possible to raise that sum in a year.

Capers is confident the funds can be raised in a year.