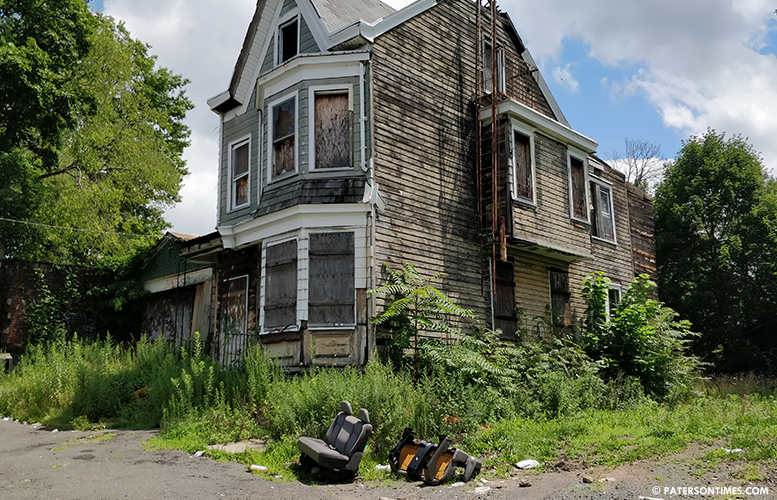 The city rejected a $7 million housing complex proposed for Arlington Street, a rundown cul-de-sac in the Haledon section, on Thursday night citing concerns over parking, garbage storage, and lack of recreation space.

The proposal sought to demolish a blighted building and garage, above, at 14-20 Arlington Street to construct a four-story masonry building that would have 39 apartments — 24 one-bedroom, 12 two-bedroom, and three studio units – with 40 parking spaces on the ground floor, according to municipal documents.

Paparozzi visited the site and had difficulty parking his vehicle at the narrow one-way street. Andy Reid, development director for JCM Investors, which proposed the project, said 40-percent of parking spaces remain empty at the company’s other residential sites in the city.

The project would provide housing for low and moderate income renters, many may not have the means to one or multiple vehicles. Alan Mariconda, attorney for the developer, said the development is close to bus stops, which will likely mean more reliance on public transportation.

There’s also a bike storage facility at the complex, suggesting some would commute to work on bicycles.

Paparozzi also pointed out the developer’s plan showed seven garbage pails for the entire complex. He said this presented a health concern.

“It’s not close to being adequate,” said Paparozzi.

“We can extend the refuse area,” replied Matthew Evans, architect for the project. He said a recycling area could be added on every floor.

Paparozzi said there’s little room in each of the floors for a recycling area. He said each apartment should have space for two containers for wet garbage and recycling.

Frank Mileto, planner for the developer, said if there’s a small space for refuse, the developer will just have to pick up garbage from the complex multiple times a week. At one point, someone stated the developer would provide private garbage pick-up for the site. There was also talk of the developer providing dumpsters instead of garbage pails.

Paparozzi said the residents would rely on municipal garbage and recycling pick up. Garbage is picked up twice every week and recycling every two weeks.

Paparozzi also found fault with having a single elevator at the four-story building. He said tenants will have to walk 100 feet to get to the one elevator.

“There’s no requirement for travel distance. This is permissible and it meets the code,” Evans replied.

Paparozzi said the building also does not provide sufficient recreation space for the tenants.

“I recommend eliminating some of the units,” suggested board member Sikandar Khan.

Prominent developer Charles Florio’s team was given five minutes to huddle and consider the suggestion.

Florio did not want to reduce the number of units.

“I hate to do a denial,” said board member Lee Mondelli.

“I really wanted to approve this,” said board member Roger Grier.

The board had expected the developer to use the five minutes to revise the plan and reduce the number of units so that approval could be granted,

Six board members were present. Five voted to reject the application.

“They chose blight over a parking problem,” said Florio after the vote. When asked if he planned to revise the project to gain the board’s approval, he said he won’t allow a “part-time planner” – referring to Paparozzi — to dictate what sort of complex to build.

Paparozzi has been hostile to his proposals at the board, said Florio. He suggested this hostility has made the Board of Adjustment hostile towards his projects.

“If Gary Paparozzi was Hoboken’s planner 25 years ago we would have no Hoboken,” he said. “He is a part time out-of-town planner who can only visit the sites by using his GPS. Paterson deserves better.”

Paparozzi rejected Florio’s criticism and said he has no ill-feeling towards him or members of his team. He got along well with Florio’s planner, Mileto, he said. Indeed, both men were very friendly to each other at the meeting.

Calling the board “incompetent,” Florio said he has no plans to seek the board’s approval again. He plans to lobby the administration to re-zone the area, which will allow him to gain approval through the Planning Board.

Re-zoning the area could take six months to a year. It’s easier for Florio to revise his project and seek the board’s approval a second time.