Paterson sprucing up intersections ahead of school opening | Paterson Times 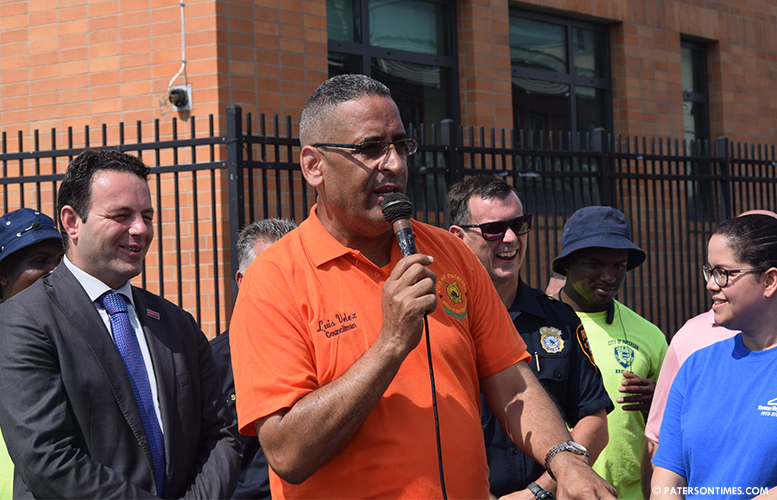 Mayor Andre Sayegh stood in front of a freshly painted crosswalk at the corner of Market and East 19th Street on Monday morning to announce a new initiative aimed at sprucing up major intersections throughout the city.

Sayegh said the initiative will ensure both motorist and pedestrian safety while presenting a crisp and clean image of the city’s main commercial corridors. Public works employees will repaint crosswalks, reinstall faded pedestrian signs, and install solar-powered blinking stop signs at two main thoroughfares in each of the six wards in the coming weeks, said officials.

“If you had seen it before, it wasn’t necessarily conducive for pedestrian and traffic safety,” said Sayegh referring to the Market-East 19th intersection. “We’re trying to improve the attitude and the atmosphere.” That may be easy. But modifying habit may not be.

Three vehicles made a turn from East 19th Street onto Market Street. One of three halted on top of the crosswalk.

The markings on the roadway was faded before, said Luis Velez, 5th Ward councilman, which may have told driver’s it was okay to block crosswalks. He pointed out two of the vehicles halted without blocking the crosswalk because of the freshly painted stop text on the roadway.

“We’re sending the message that people need to be safe. Students have to be safe. And the corners have to be cleared,” said Velez standing in front of the New Roberto Clemente School.

“If you neglect an intersection it leads to bigger problems down the road,” said Sayegh.

Area businesses welcomed the change. Representatives from Vanessa Cleaners and Floristeria Mia flanked the mayor during the announcement.

“It’s much clear,” said Jose Hernandez, owner of Vanessa Cleaners, looking at the repainted road markings in front of his business.

The painted road markings have a life of one year, according to public works officials. The city hasn’t repainted major intersections in the past two years, they said.

Sayegh said the latest initiative is part of his effort to change the city’s image. Two weeks ago, the mayor announced a program to deploy 24 people to keep major thoroughfares clean.