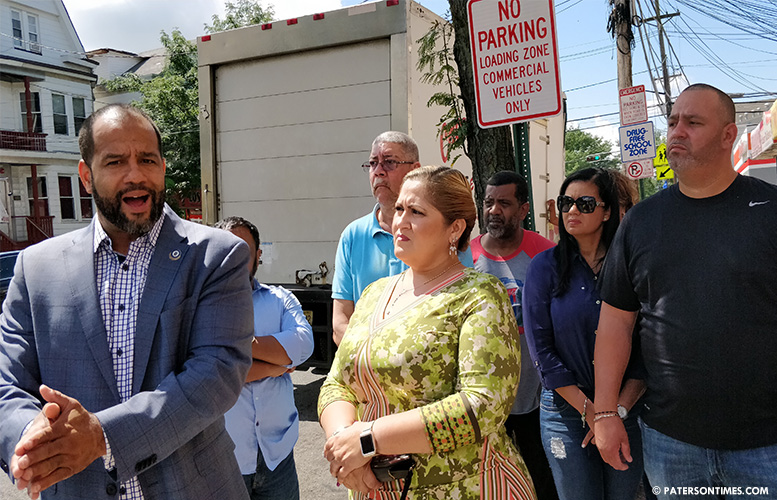 The leadership of the City Council unveiled an alternative to mayor Andre Sayegh’s plan to add a violent section of Union Avenue to the business curfew ordinance that would force shops in the two-block segment to close at midnight.

Under the plan unveiled on Tuesday afternoon, 14 businesses will form an association to hire an off-duty police officer to patrol the three rough intersections from 11 p.m. to 3 a.m. seven days a week, according to council vice president Michael Jackson.

Jackson, who is chairman of the public safety committee, represents the 1st Ward, where the problem area is located.

“As you can see, we have a lot of businesses out here today. They all stand in unison and support,” said Jackson, standing in front of Willy Mini-Market. In front of him were eight merchants, who own businesses on Union Avenue from Redwood Avenue to Kearney Street. “They are willing to take on that obligation to put a dedicated police officer out here during those hot times of the evening.”

The businesses could expect to pay $1,200 to $1,400 per week for the extra security, said Jackson. An off-duty police officer with a vehicle could cost $75 per hour, according to police officials. There’s a $50 per hour rate, $15 marked vehicle fee, and $10 administrative cost. That could cost the area businesses $2,100 per week.

If divided evenly between the 14 merchants that amounts to $150 per a week.

Jackson said the fees could be negotiated with the police union.

“The business owners came together. They came to us and said, ‘How are they going to close down our businesses?’ said council president Maritza Davila. “Closing down businesses is not the solution.”

If there’s a business that is doing wrong, inside their business, it ought to be shut down, said Davila.

Davila put off a vote on the ordinance that would have designated the area as a hotspot.

The problems are not inside the establishments, said business owners. Victor Gomez, who has owned the El Fogon Restaurant for 22 years, said he is being lumped in with the undesirables in the area.

“I want to look at it with a positive attitude. Let’s start it and see what happens,” said Gomez. “We do need help from the police department.”

“If I think it will help? I think it will,” said Jose Munoz, owner of Boulevard Wine Spirit Liquor. “We’re willing to do whatever it is to better our businesses.”

Police said his business was cited for liquor violations 32 times since 2016 for selling after the legal hour. He downplayed the violations and said he has taken steps to rectify the situation.

Both liquor businesses remain open after midnight. Jackson said other area businesses, including those that close before nightfall, have jumped on board to make the area safer for their customers.

Some of the businesses have been negatively affected by crime in the area. For example, Alex Chaudhary’s auto repair shop, which closes long before midnight, was burglarized last month. The criminals stole $45,000 worth of goods, he said.

The mayor’s plan was opposed by both liquor businesses. Both businesses generate significant amount of their revenues after midnight.

A third of Gomez’s business revenue is generated after midnight on weekends, he said. It’s higher for Munoz.

Munoz said 50-percent of his revenue is generated after midnight on the weekends.

Both men successfully lobbied council members to oppose the plan.

“I think the mayor’s plan is a valiant effort,” said Jackson at the press conference.

“But it falls short,” interjected Davila.

“It doesn’t completely address all of the issues. The residents don’t feel safe,” said Jackson. He said a police officer could start patrolling the three intersection in three weeks.

Jackson called the plan a “pilot” initiative. He said the area has to be assessed every month or every quarter to determine whether the initiative is working to curb crime.

The mayor is not opposed to the council’s alternative plan.

Some on the council took offense at the talk of an executive order to impose business curfew in the area without going through the council.

Sayegh on Tuesday suggested he doesn’t have a plan to impose the curfew through an executive order.

“I’m here to protect the people in that area. I’ll exhaust all options when it comes to protecting Patersonians,” said Sayegh, who renewed the call to add the area to the curfew following a recent double shooting.