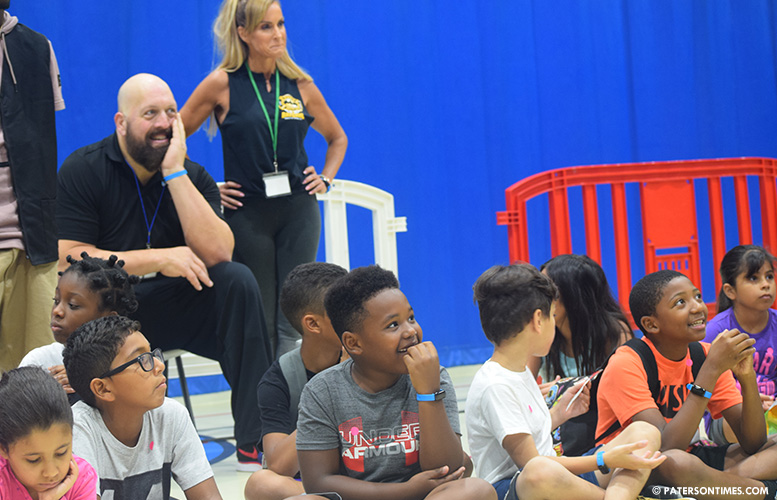 The Big Show and Mark Henry entered the gym room to big cheers from their young fans at the Boys and Girls Club on Wednesday morning.

Most of the 91 boys and girls, 8-12 years old, were eagerly waiting for the wrestling stars.

“We saw Big Show!” an overly excited Jaycen Gary, 9, told some of his friends as they passed him in the hallway of the Boys and Girls Club.

Gary said he had been “really excited” when he heard the World Wrestling Entertainment (WWE) stars would be visiting the club. He had been counting down the days. He was most happy to see the Big Show.

“He is much bigger in life. His hands are huge. I never saw anybody that tall,” said Gary, speaking of the Big Show, whose actual name is Paul Donald Wight II. He watches wrestling on YouTube, he said.

The Big Show, Mark Henry, Nia Jax, Ember Moon, and WWE ambassador Dana Warrior were at the club as part of Summerslam Week, when the wrestling organization sends its stars to different communities champion important causes.

The WWE teamed up with the UNICEF USA to support Kid Power, a program that involves young people engaging in physically activity to earn points to help fellow youngsters in need throughout the world.

“The Kid Power Band syncs with an app that encourages kids to take steps and earn Power Points. The more points kids earn, the more food they can help UNICEF deliver to malnourished children around the world,” says the UNICEF USA website.

The WWE officials said every youngster will receive a band.

The young people also received valuable advice from the wrestlers on getting involved in the community and being comfortable in one’s own skin.

“The biggest thing you can do for your community is get involved. You can show you care. Simple things: helping your neighbor, helping your friends — you see trash on the ground pick it up and throw it in a recycling bin,” said the Big Show to the youngsters. “These are little things you can do to give back to your community.”

Big Show told the young people how he became so big. He told them he was diagnosed with a tumor, a disease called, acromegaly.

“It’s one of the reasons why I grew so big,” he said. “It wasn’t healthy. So I had to have surgery to have that fixed. It was very tough for me when I was younger because I always thought I was healthy and strong. To find out there was something wrong with me was very hard to adjust to.”

But it all worked out. In his first match he beat Hulk Hogan to become the WWE world champion, he said.

“It’s type of sad,” said Gary after hearing the story. “I’m glad that he feels good.”

The Big Show told the young people to be themselves and not to imitate others.

Did you ask for his autograph? “No. I want to though, but he has to go to the next group,” said Gary.

Henry was with another group downstairs. Young people had to come up with a tag line for themselves and create a wrestling move. Each created their tag line and performed a quick wrestling move.

Representatives from UNICEF USA turned the event into a learning experience for young people by teaching them about other countries. For example, some learned about Indonesia. Its major cities and that it is home to the coconut crab.

Some of the youngsters were unfamiliar with WWE stars. Lindsay Castro, 10, and Janae Gardner, 9, do not watch wrestling, they said.

Castro said she has played wrestling video games. Neither knew the likes of Big Show and Mark Henry.

“I want to see them wrestle or teach us some of their moves,” she said before the stars arrived. The WWE stars weren’t there to wrestle. But, Gary predicted a winner in a match between Henry and the Big Show.

“Everybody thinks Mark Henry is the strongest man alive. I’d think it’s big show because he can do two neck slams,” said Gary.

Wendy McGuire, deputy executive director for the Boys and Girls Club of Paterson and Passaic, thanked both the WWE and UNICEF.

“Today is one of those really special days. This is a big deal for us,” McGuire told the stars and the young people. 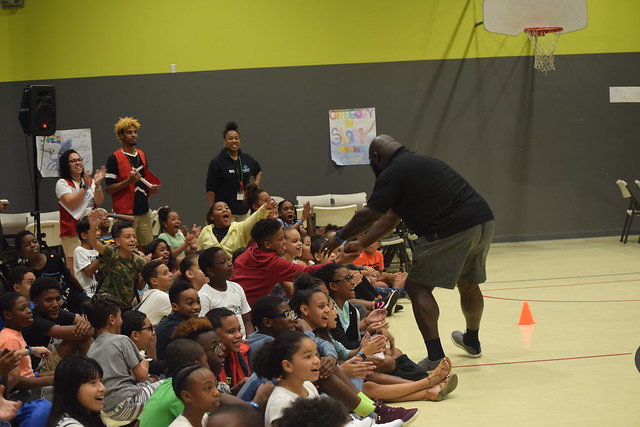