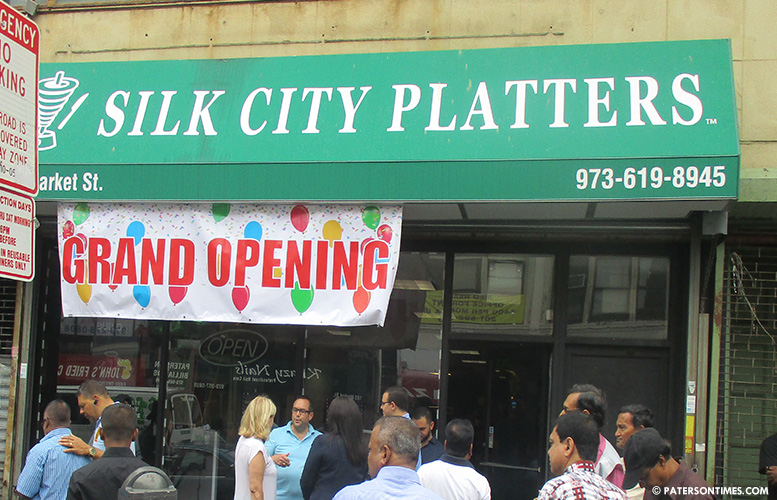 The Silk City Platters, a halal restaurant offering a mix of Mediterranean and South Asian cuisine, opened with fanfare in downtown Paterson.

Restaurateur Azi Alam had well over 100 people for the restaurant’s grand opening on Saturday afternoon.

“I welcome all of you,” Alam told the well-wishers. “We have not only received support from Paterson, but also from the around the state. We want to stress that Paterson, the Silk City, is a city of quality.”

Alam’s eatery has a simple menu that gives its patrons complete freedom to customize their entree. A patron picks pita, platter, or salad. Then comes the fill of chicken, gyro, falafel, or mix. And finally, topping it with different vegetables like tomatoes, green peppers, and other options.

The signature dish is the mixed platter, a combination of lamb, beef, and chicken, served with basmati rice, topped off with house made white sauce or hot sauce. The regular sized platter costs $6.59. Supersized goes for $8.48. The owner said vegetarian options are also available including falafel, or patty made with chickpeas.

His first customer on Saturday was councilman Michael Jackson, a fellow graduate of John F. Kennedy High School. Jackson proudly held up his receipt that marked him as the restaurant’s first patron.

Jackson’s colleagues and other officials from state and federal government attended the ribbon cutting.

“This is a sign that we are coming back,” added councilman Luis Velez, referring to long promised renaissance of the once mighty industrial town.

Congressman Bill Pascrell presented Alam with a congressional citation. The congressman viewed the opening of the new restaurant as a “good sign for our city.”

The fanfare attracted Antoinette Buchanan, who lives across the street from the restaurant. She came over to see what was occurring at the site of the former Subway restaurant. She was glad to it wasn’t a new fast food place.

“I’m glad for this restaurant being here,” Buchanan said. “This is not fast food.”

Alam’s is one of a small number of restaurants serving halal food in the downtown Paterson area. A competitive advantage for the new restaurant. His customer base is the growing Muslim population in the city’s south and west. Majority of the city’s halal eateries are in the South Paterson section, a neighborhood with a large Middle Eastern population.

The flawless grand opening required a lot of hard work. Alam closed the shop on Friday to prepare for the ribbon cutting event.

“His hard work has paid off,” said Suraiea Hussain, who attended the grand opening with her sister Fouzia.

The Hussain sisters said they were friends of the Alam family.

Fouzia said she had no doubt about what her first taste of cuisine for the afternoon would be.  She also said her expectations of the entrée she was about to choose were very high.

“I’m going to order lamb,” the Rutgers University student said. “My mother cooked lamb all the time when I was growing up. Hers was always delicious.”

The Silk City Platters is a “family effort,” said Alam, 28. His father stood by his side for the ceremonial ribbon cutting. The younger Alam is a lifetime resident of Paterson. He was overwhelmed by the encouragement from friends and neighbors.

Alam’s deep affection for his hometown is made obvious by a large, colorful painting of the Great Falls that hangs inside the new restaurant.

Mayor Andre Sayegh was among the well-wishers. He called the pristine food emporium, “an iconic, nostalgic place that pays tribute to our past and sets the mark for future success.”

The Silk City Platters is located at 170 Market Street. It is open Monday through Saturday from 11 a.m. to 9 p.m. Ordering is available by calling 973-619-8945. Visit the restaurant’s Facebook page for more information on its offerings.