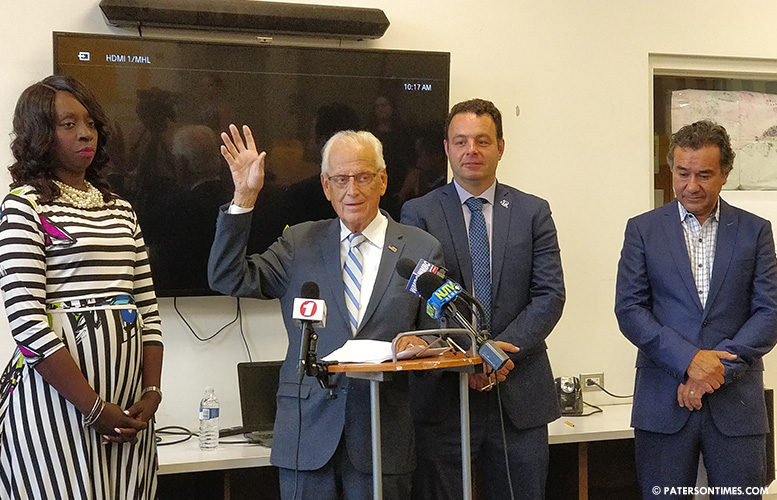 The city is getting $5.4 million in grant funds from the U.S. Department of Housing and Urban Development (HUD), including $185,234 to reduce homelessness, announced congressman Bill Pascrell and mayor Andre Sayegh on Monday morning.

The grant amounts are as followed:

The figures represent a 10.7-percent increase from the previous year, according to officials. In 2017, the city received $4.87 million in entitlement dollars.

“These HUD awards are a game-changer for Paterson. They will be a big help to some of our city’s residents struggling the most: those seeking stable housing opportunities, the homeless, and men and women struggling with HIV and AIDS,” said Pascrell.

The congressman was joined by municipal officials at the Boys and Girls Club of Paterson and Passaic on 21st Avenue to announce the grants.

“We are profoundly grateful to congressman Pascrell for continuing to be a passionate voice for Paterson in D.C.,” said Sayegh. “These HUD grants are needed more than ever as my administration looks to combat some of our city’s biggest challenges – from homelessness to increased opportunities for youth and so much more. This funding not only allows us to address certain community needs, but to empower our non-profit and faith-based community to be partners in these efforts.”

The Boys and Girls Club of Paterson and Passaic has been a recipient of grant funding for years. This year, the club is getting $160,000 in CDBG funds, according to Ruben Gomez, director of Community Development.

Gomez said the nonprofit is getting $100,000 to make improvements to its patio at the 21st Avenue location. He said another $60,000 is going towards administrative costs of running an after-school homework tutoring program for young people.

The nonprofit runs a program called the “Power Hour,” an hour to help youngsters with homework after school, said officials from the Boys and Girls Club.

The Boys and Girls Club serves 1,100 youngsters, mostly from low-income families, in Passaic County. 700 of them are young people from Paterson, said officials from the nonprofit.

Power Hour starts on the first Monday of the second week of school.

Without the grant funds, the Boys and Girls Club would have a tough time running its programs, said Al Daloisio, Jr., chairman of the club’s board.

“There’s no way we could come up with the money. There are not enough businesses to donate their services in Paterson,” said Daloisio. His family has owned the Railroad Construction Company in South Paterson for 92 years.

“A lot of these kids go home and there’s nobody there. That’s not acceptable,” said Pascrell. Many parents in this blue-collar town work multiple jobs to make ends meet. Family income is under $34,000 – New Jersey average is twice that amount.

“We’re bringing in a whole new group of children and keeping them away from the gangs,” said Daloisio.

Indeed, the city has a serious gang problem. There are multiple offshoots of violent gangs like the Bloods, Crips, Trinitarios, and others operating in the city. Many recruit impressionable young people, leading them into a life of drugs and crime.

“We got to bring them to a place that is safe, secure, and where they are not just going to hang around. They are going to be doing something useful, even though it’s at the end of the school day,” said Pascrell. The Boys and Girls Club offers a plethora of activities for young people, including a science, technology, engineering, and mathematics (STEM) program.