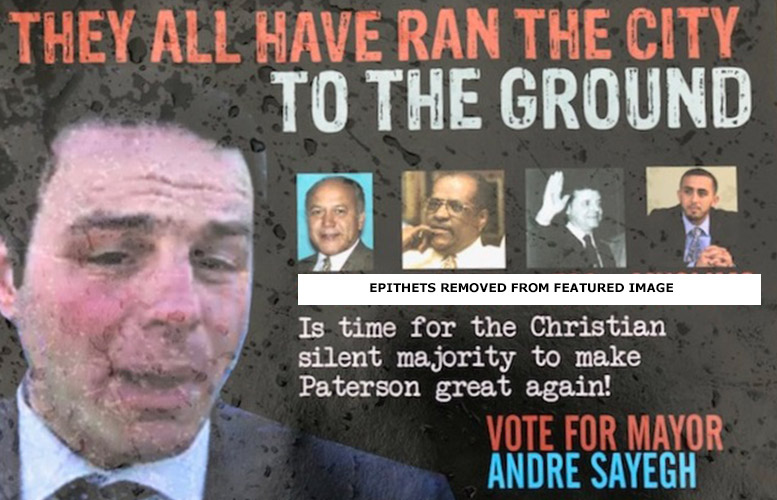 The racist flyer that circulated in the city days before the mayoral election in May is being looked into by the authorities, according to sources.

Investigators from the New Jersey Attorney General’s Office and the Passaic County Prosecutor’s Office have questioned several people about the flyer and the mayoral election.

Peter Aseltine, a spokesman for the New Jersey Attorney General’s Office, declined to comment. “Our policy is that we neither confirm nor deny investigations,” he said on Friday.

Passaic County prosecutor Camelia Valdes’ office did not respond to a call for comment.

Mayor Andre Sayegh, who was the target of the flyer, earlier in the month, said he was unaware of the investigation. His wife Farhanna filed a complaint with the New Jersey Attorney General’s Office in May.

She urged attorney general Gurbir Grewal to look into the offensive flyer.

“The language on the flyer contains racial epithets to describe African Americans and Latinos, and includes shameful and hateful attacks against both our Muslim and LGBT communities,” she wrote in her letter. “It is divisive and vile, and this hate mail was designed to falsely insinuate to voters that this language was coming from Andre.” 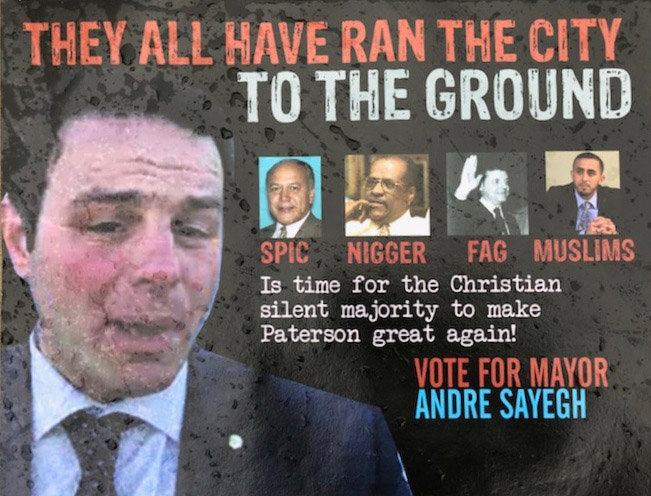 Castro has denied the person in the footage is him.

“I’m going to cooperate with all law enforcement to make sure this person comes to justice. Whomever the responsible party is,” said Castro on Friday. “I want this person found. This should not happen in Paterson, ever.”

Castro, who is Puerto Rican, has said the flyer offended him. He pointed out his wife is Jamaican and his children are mixed race. He said the Sayegh campaign has try to put him in middle of it because of his past criticism of the then-councilman and now mayor.

“I’m saddened by the people that are making wild accusations,” said Castro, who is a possible contender in the 6th Ward for Sayegh’s old seat.

The mailer accused Hispanics, blacks, homosexuals, and Muslims of running the city “to the ground.”

“Is time for the Christian silent majority to make Paterson great again!” reads the flyer.

The mailer purported to be sent by the Progressive Values Committee of Bayonne, a super PAC that backed Sayegh. The PAC sent a number of flyers attacking Sayegh’s opponents.

Joe Waks, chairman of the super PAC, has condemned the flyer as “disgusting.” He said it’s a “fake news mail piece” released by Sayegh’s opponents.

Instead of damaging Sayegh’s chances, the flyer galvanized his supporters. He won in a landslide on election night.