The city’s students made slight gains in the PARCC exams in the 2017-18 school year. Students in grades 4-8 boosted the district’s average scores in both math and English by single digits. But their peers in the state continue to outperform them. 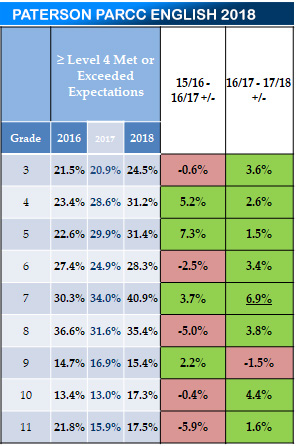 Seventh graders improved their scores in the English portion of the Partnership for Assessment of Readiness for College and Careers by almost 7-percent. Almost 41-percent of them met or exceeded expectations in 2018, up from 34-percent.

Fifth graders boosted their average in the math portion to 22.5 from 18.9 last year, a 3.6-percent gain.

“This is growth, right here,” said superintendent Eileen Shafer. She presented the latest scores at the Superintendent’s Institute for district administrators at Passaic County Community College last week. “There’s still a lot of work to do. But this is great news for each and every one of you here because you put a lot of time, a lot of energy, and a lot of work in making this happen.”

Still, the modest gains are welcome news for the district which saw scores dip for almost every grade level in math in the 2016-17 school year. In English, scores went down for 5 of the 9 grades.

The controversial exams, which governor Phil Murphy has promised to scrap, are administered to students in grades 3-11. His predecessor, Chris Christie, implemented the PARCC in 2014-15 school year.

The slight gains do little to close the gap between city students and their peers elsewhere. For example, 10th graders in the district pushed up their average in English from 13 to 17.3-percent. At the same time, the state average increased from 46.3 to 51 in 2018, according to New Jersey Department of Education data. 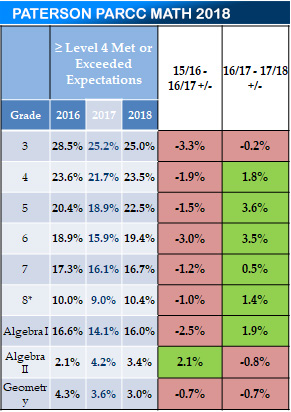 “We recognize that there is much work that still has to be done,” said school board president Oshin Castillo. “But we applaud Superintendent Shafer, her administration and all of the district’s educators for taking these great steps forward.”

Shafer is taking a series of steps to improve academics in the district. She is launching a new reading program for K-5 students, a reading campaign, and high school math intervention initiative.

Shafer took over the district last year at the departure of Donnie Evans.