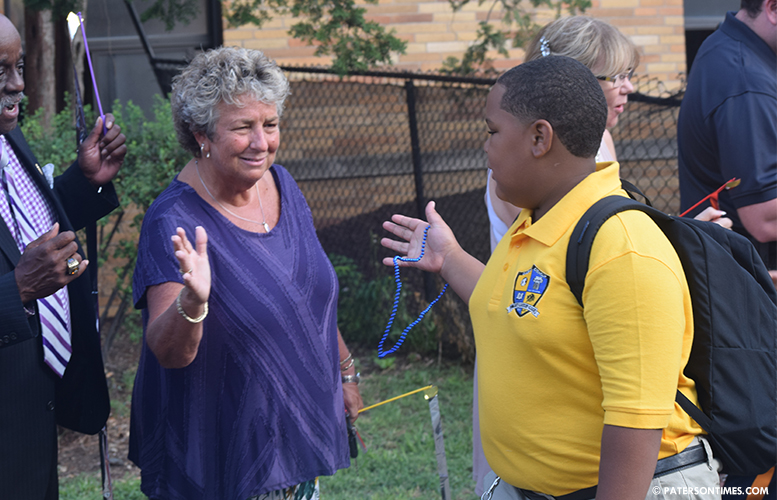 The beaming young boys jumped out of the yellow bus to form a line outside of the Young Men’s Leadership Academy to start their first day of school. The boys were greeted by instrumental music and school officials waving purple streamers.

“Are you ready?” asked superintendent Eileen Shafer to several of the boys in line. Many of them nodded yes.

The boys were clad in the same color uniform as last year, but much has changed at their school over the summer break. This year, the boys will spend an extra hour in school, receive extra mentoring services, and be taught by teachers specifically trained to instruct boys.

“Everything is different. We have new staff and renewed vision,” said Shafer.

“We know boys learn differently,” said Vernon Maynor, principal of the Young Men’s Leadership Academy. He hopes the newly trained teachers will be able to boost academics at the school.

Maynor found his school placed in the lowest five-percent of low-income schools in New Jersey last school year. 90-percent of boys failed in the English section of the of the Partnership for Assessment of Readiness for College and Careers (PARCC) in 2016-17 school year.

The principal said he and other school officials visited a number of all-boys schools in the Northeast to identify best practices and implement them at the Young Men’s Leadership Academy.

Some school board members wanted to close down the Young Men’s Leadership Academy, which opened with lofty aims in the 2015-16 school year, for poor academics. Others argued the previous administration poorly executed the plan for the all-boys school.

The board settled on implementing a “turnaround” plan after some argued the district needs to find a way to better educate its Hispanic and black boys, who are academic laggards.

“I think this year this school is going to be dynamic with all the changes that we have made,” said school board vice president Nakima Redmon. “We focused on the academics and giving these students a fair shot.”

Redmon and her colleague Vincent Arrington joined the superintendent in greeting the boys and giving them high fives at the entrance to the school on Wagaraw Boulevard in Prospect Park.

“This year they are focused on having people there that actually want to be there,” said school board member Kenneth Simmons. He was part of the committee that originally proposed the all-boys school.

Teachers had to re-apply for their jobs at the school, giving those uninterested in being there to go elsewhere.

The school began to struggle after assistant superintendent Aubrey Johnson, who championed the concept, departed from the district, said Simmons. He became the superintendent of the New Brunswick school district.

Shafer tasked assistant superintendent Cicely Warren to put together a plan to reform the school.

“Pretty much what she sets out to do, it gets done,” said Simmons of Warren, describing her as a “no-nonsense” administrator.

Warren has identified specific benchmarks for the school. She wants 80-percent of students entering grades 3-5, who are two or more years behind in reading, to boost their reading skills by one level through guided reading and intervention. She wants attendance increased by 2-percent from last year’s 93-percent.

She wants students in 6-8 grades to improve their writing skills by 25-percent.

Redmon and Simmons want to see a status report on the school in 3-6 months to see if the targets are being met.

Simmons noted the principal has a tough task ahead. The school still has many students, who were transferred to the Young Men’s Leadership Academy, for behavioral issues.

The parents at the schools are optimistic the school will turnaround.

“We can all hope for the best,” said Kim, whose son is in the 5th grade. She would not provide her last name. Her son started at the school in January. She said she picked the school for its small classes. Her son will receive better individualized attention at the Young Men’s Leadership Academy, she said.

Martina Peredes dropped off her nephew in the 4th grade. “It’s better than School 6,” she said. She described School 6 as “bad.”

“Here the people are nice — the teachers, the principal,” said Peredes. She said last week, the school held a parent meeting and threw an ice cream party for the boys.

“This is a new start for my son,” said Ishiah McKnight referring to her 4th grader. She came to the school at about 9 a.m. to get contact information of her son’s new teachers. “I see the principal is ab0ut his business. I’ve given him an opportunity to brighten my son.”