The number of confirmed harassment, intimidation, and bullying cases in city schools have almost doubled in 2017-18 academic year. 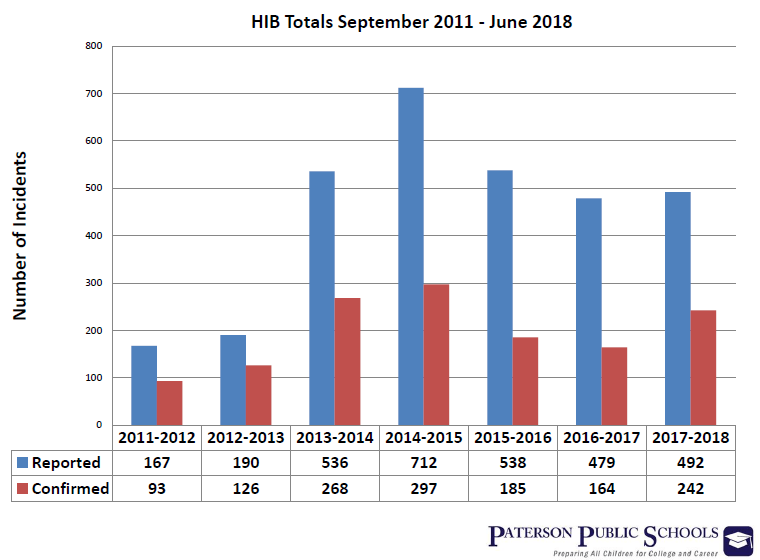 “This year there was an uptick in confirmed incidents compared to the previous two years,” said Theodore Best, anti-bullying coordinator for the Paterson Public Schools, last Wednesday.

The three elementary schools with the most confirmed cases were:

Best has praised these schools in his past presentations to the board. He continued to censure schools that reported zero incidents.

School 13, 4, 14, and Edward W. Kilpatrick School were among the elementary schools that reported zero incidents.

The three high schools with the most confirmed cases were:

The city’s 14 high schools had 31 confirmed cases. 73 incidents were reported.

“Why are schools failing to report?” asked school board president Oshin Castillo.

Best said school administrators have at times misunderstood what constitutes a harassment, intimidation, and bullying incident.

“There’s some principals, who felt, by having any reports of HIB that it would be a bad reflection on their school,” he said. “There was training that was done to tell them it’s okay to have reported incidents. It’s not how many cases you have, it’s how you address culture and climate in your school.”

Principals have received training over the summer to ensure their schools are properly reporting incidents, said Best.

Best said parents and students can report incident directly to the district via its website.