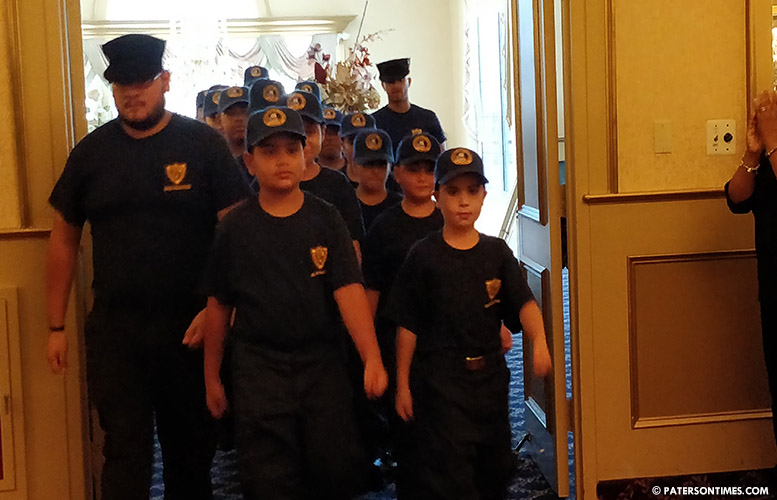 Kizzy Owens stood up and began loudly cheering for her son at La Neve’s banquet hall on Sunday afternoon. Her son, Ramir, was among 40 youngsters, between ages 10-16, to successfully complete the Paterson Police Athletic League (PAL) cadet and leadership training programs.

Owens’ son had to put in 22 weeks of work to see graduation day. She described the cadet program as “awesome.”

“It’s real strict. Firm discipline. Teaches them a lot,” said Owns after snapping a few pictures of her son accepting his graduation token. She said her son hopes to one day become a K-9 officer.

Her son is on the right track.

“The only thing they don’t do is shoot a gun,” said Feola. He said 20 young people finished the cadet and another 20 completed the leadership program.

Passaic County correctional officer Michael Nieves is one of them. He enrolled in the cadet program when he was nine years old, he said. Since 2010, he has been working at the Passaic County Sheriff’s Office.

Nieves volunteers as an instructor at the Police Athletics League. He said young people learn a variety of things at the program including police radio codes, fitness, and how to interact with police officers.

There are plenty of benefits for young people, who spend five hours every Saturday.

“It takes away the fear of public speaking,” said Nieves.

“You learn self-esteem. I had no self-esteem. I was really shy,” said Fabiana Godoy, 14, a student at the School of Government and Public Administration (GOPA) at Eastside High School.

Godoy’s shyness vanished after finishing the 22-week program. She said she wants to become an FBI agent.

The 40 youngsters are part of the Police Athletics League’s 37th class, said Feola. He said 7,000 youngsters have completed the program over the years.

Feola said the program has a broader mission of keeping young people occupied and giving them hope for the future.

“We’re losing our kids to our streets,” said Feola. His family grew up poor on in the Sandy Hill section. Many of his siblings became successful, he said, highlighting the power of effort and determination over the environment.

Feola blasted local politicians for showing little interest in the program. He pointed to an empty table that was reserved for elected officials.

“All your politicians are supposed to be here today. Let’s see if they show up,” he told several dozen parents of the young people. “Personally, I can careless if they don’t show up, as long as my kids receive what they are supposed to, I’m happy.”

The young people are all Paterson residents.

Councilwoman Lilisa Mimms appeared at the ceremony. She told Feola the city appreciates the work he has been doing for the past decades.

Feola received a mood lift from developer Sandy Sorce, who handed him a $50,000 check for the Police Athletic League and pledged another $50,000 for next year.

“I love these kids,” said Sorce. He described himself as a real estate developer in Hackensack

“Sandy, you have no idea what I can do with that money,” said Feola.