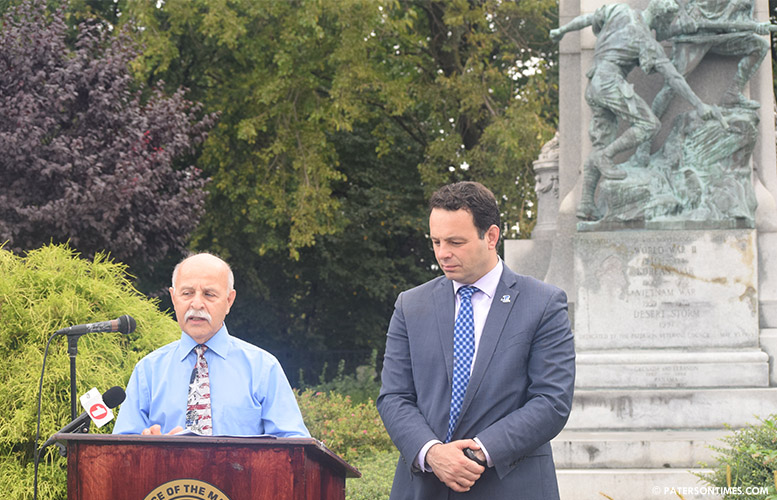 A roadway and a parking area are being built at the Veterans Memorial Park on McBride Avenue to allow disabled veterans access the Hill of Heroes, a memorial to the local soldiers who gave their lives in American wars.

“It’s not about us. It’s about the men and women who served this country,” said Tony Vancheri, president of the Paterson Veterans Council, on Wednesday morning.

Except, for the past three and half years, there was a tussle between former mayor Jose “Joey” Torres and the veterans on the way to make the park accessible to disabled veterans. Vancheri said the competing vision for the park badly delayed the project.

Torres wanted to build a sidewalk along the existing pathway up to the granite obelisk, according to municipal officials.

“These improvements – creating a road to the top of the memorial as well as parking for four handicapped cars and one wheelchair accessible van – will make it possible for more veterans to enjoy celebrations of their service,” said Sayegh.

The space under the obelisk is used to remember the sacrifice of the fallen soldiers and veterans of conflicts from the American-Indian to the Iraq wars.

Vancheri said the improvements are being funded through a $134,000 open space grant from the Passaic County government. He said he reached out to Passaic County freeholder John Bartlett some years ago seeking funds for the project.

Bartlett was able to find some funds for the project, said Vancheri. The grant was awarded in 2015, said Kathleen Caren, open space coordinator for the county.

Vancheri said the project will be completed in Nov. 2018. He said contract for the construction was awarded to MBC Construction of Hackensack.

Passaic County has 14,200 veterans, according to county veterans officer John Harris. He said 10-percent of those are disabled.

There are 3,000 veterans living in Paterson, said Harris.