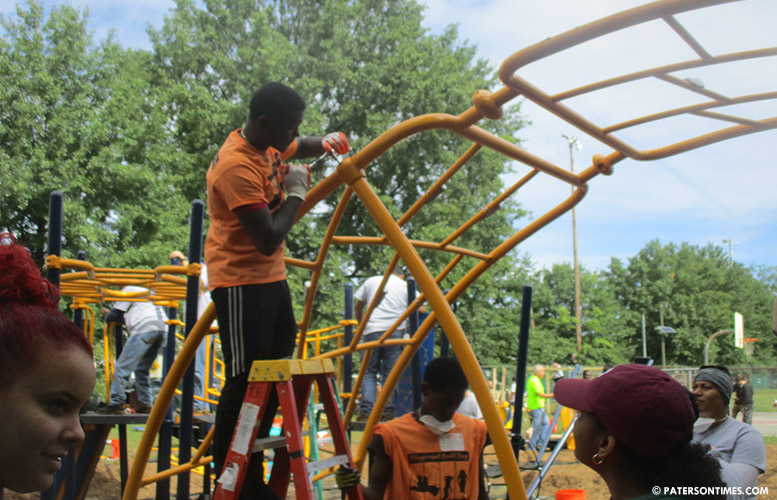 A playground emerged at Westside Park on Thursday afternoon after a day of work by 150 volunteers.

Some of the volunteers were local young adults, who did not have a playground to play in while growing up.

“When I was 10 or 11 years old, growing up here in Paterson, I attended School 8. There was no playground,” said Natasha Cruz, 18, a member of YouthBuild, a program run by the New Jersey Community Development Corporation (NJCDC). She wanted young people today to have what she did not. “I feel good about helping out and creating a better environment.”

“Neither one of my schools had a playground but only a basketball court,” said Kasmir Sparks. “There was a playground by School 6, but we couldn’t go there during school hours. However, after classes were over we would go to Montgomery Park and play.”

Young people in the Hillcrest neighborhood will find a playground close to the tennis courts at Westside Park thanks volunteers like Sparks and Cruz.

“I have a little sister who is in the 5th grade. I want all kids to have the opportunity to have fun playing outdoors,” added Taeisha Kelley.

The young adults were joined by employees of PSEG and Kaboom!, a nonprofit that helps communities build playgrounds for children, to construct the playground.

“It’s great getting an out-of-office experience,” Dylan Walkeard, a resident of South Orange, said. “I’m happy to help the children of Paterson.”  He travelled from the PSEG office in Newark to participate in the construction.

NJCDC also provided food for the large number of volunteers.

The playground covers a footprint of 25,000 feet. It has sections that include a summit climber, single post swings, and a monorail. It meets Americans with Disabilities Act (ADA) requirements.

Volunteers started construction at 8 a.m. It was hard work. Workers manned rakes, shovels, and wheelbarrows. Others handled hammers, wrenches, and screwdrivers. Pre-delivered playground equipment had been secured in a large, portable storage unit.

Concrete was mixed on site, poured into wheel barrows, and ferried to the playground area, providing mooring for the metal equipment. 60 cubic yards of mulch, situated in huge piles, was also transported to ensure safe surface for children’s activities.

“When I came today, I was surprised,” said Martin Sanchez, 18. “I didn’t know there would be hard labor like shoveling and raking.”

Mayor Andre Sayegh capped off the project with a ribbon cutting at 3 p.m.