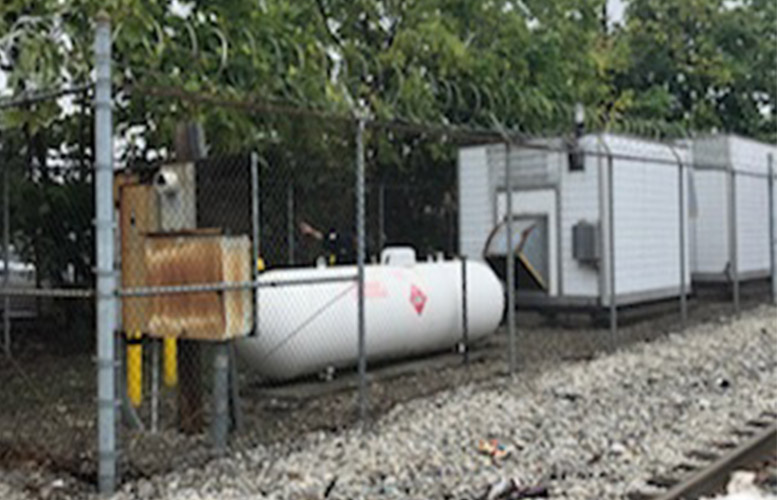 Municipal officials said the propane tank was installed to warm fiber optic lines in two trailers at the same location. Placement of neither the 1,000-gallon cylindrical tank nor the trailers were ever approved by the municipal government.

“They looked it up and there was no zoning approval for the tank,” said David Gilmore, director of the Division of Community Improvement. He said inspectors looked at records, but could not find any permits for the tank and the trailers.

“If something were to strike it, like a bullet, it could blow up and hurt a lot of people,” said a municipal inspector at the scene, who did not want to be named. Gilmore noted the tank is located close to Martin Luther King, Jr. Elementary School.

Inspectors also discovered a barrel that contained non-toxic oil. Freight train had to be re-routed while inspectors from the Jersey Department of Environmental Protection (DEP) examined the barrel.

Officials said a representative for Verizon at first claimed the tank had been at the site for 30 years. Verizon hadn’t deployed fiber optics until 2005. The representative later told officials the company will decommission the site on Monday.

David Weissmann, a spokesman for Verizon, did not respond to a message for comment on Friday.

Gilmore said the city is in process of issuing violations to the company.

Municipal officials received information from a resident about the tank. The resident was frustrated after a bank refused to sign off on a real estate transaction by citing the tank being close to the house.

“This is another disaster avoided by the sharp-eyed inspectors,” said Gilmore. He said inspectors will conduct a check on Monday.