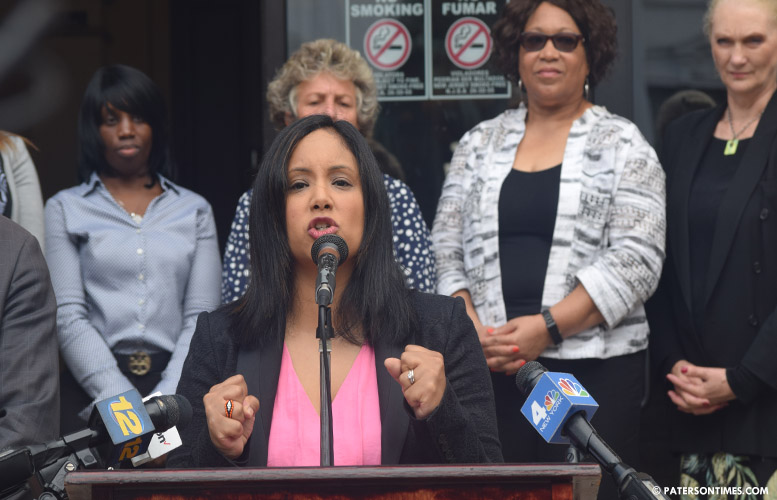 Standing on the steps of the historic City Hall, first lady Farhanna Sayegh cited the grim statistic that fewer than a quarter of city students were reading on grade level. She vowed to change that by championing the second phase of the Paterson Reads initiative.

“We’re going to turn that number around,” said Sayegh (pictured) on Monday morning. 79-percent of city students are not reading on grade level. “Parents are the secret sauce. We need to get parents behind this in a big way.”

Second phase of the Paterson Reads initiative has received a $100,000 grant from the Henry and Marilyn Taub Foundation. Half of the budget will go towards marketing to reach and engage parents, said Rosie Grant, executive director for the Paterson Education Fund. Public affairs firm Amplify will conduct out reach for the effort.

Grant said over the next six months her organization will lead the planning on the second phase of the initiative. She said planning will include identifying goals and setting targets. First phase of Paterson Reads began in 2012, when 19-percent of third graders were reading on grade level. Today, 21-percent are, she said.

School board president Oshin Castillo said the involvement of so many community groups will make it easier to educate parents about the importance of ensuring their children are reading at grade level.

Shafer has hired librarians to adequately staff school libraries. She also launched a new K-5 reading program to boost reading in the district.

The first phase of Paterson Reads did not involve City Hall.

Mayor Andre Sayegh promised to be an “education mayor” when he ran for the city’s highest office in May.

“It may not have happened in the past. But don’t hold the past against the present, so we can help the future,” said the mayor.

City Hall has largely stayed out of education policy over the past decades. But with the return of local control, municipal officials have shown a keen interest in education.

“We finally have a true partnership with the city. The Board of Education has been trying to form a relationship with City Hall for the longest [time],” said school board vice president Nakima Redmon. She hopes the initiative boosts the number of students reading at grade level at the end of third grade above 30-percent in the coming years.

Sayegh is the first first lady in recent memory to champion a public cause, said officials. Last first lady to take on an issue was Mary Kramer, wife of longtime mayor Lawrence “Pat” Kramer. Kramer saved the Great Falls for posterity.

Mary Ellen Kramer Park is named in her memory.

Sayegh said her role is to rally parents and get them to exert effort to ensure their children are reading at grade level. She and the mayor have three children. Their eldest daughter is enrolled in kindergarten at a city school.