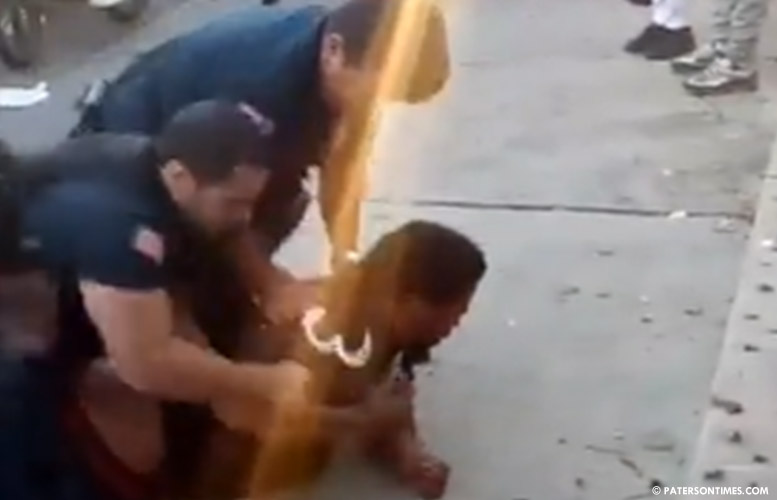 A city police officer is seen striking a suspect in the back of his head while struggling to handcuff him in a video that circulated on social media over the weekend.

Raaseon Adams, 42, of Paterson, is the man being punched at least three times by an unidentified police officer, who, along with two other officers, is attempting to handcuff the resisting suspect, on the sidewalk of Godwin Avenue between Carroll Street and Rosa Parks Boulevard, according to police and family members.

“Why was he beaten up?” asked activist Bilal Hakeem on Saturday. “My nephew is deaf and mute.”

Adams, known on the street as “Pike,” was caught up in a police drug bust in the area, according to municipal officials.

A dozen onlookers gathered around the scene. After the officer struck Adams several times, the crowd began to react. Some taunted the officers and one person hurled an object at them.

“Yesterday could have been a riot,” activist Ernest Rucker, who shared the video on his Facebook page, said on Saturday. “There was no reason for him to punch him. The cop was stupid enough to punch him on the camera.”

Rucker said drug dealers in the area take advantage of Adams and use him as a depository for their wares. Police said Adams has an extensive rap sheet of being involved in drug activity. Rucker recognized Adams has been arrested many times on drug charges. He said that’s not a reason for a police officer to attack him.

“I haven’t seen it, but I heard a lot about it,” said police chief Troy Oswald on Saturday afternoon speaking of the viral video. He said such things are turned over to the Internal Affairs Division and the Passaic County Prosecutor’s Office for investigation.

“The matter has been referred to the county prosecutor’s office,” said police director Jerry Speziale.

“I have been in contact with Prosecutor Valdes directly numerous times over the weekend and can assure the public that both she and I take these matters seriously,” said mayor Andre Sayegh.

Passaic County prosecutor Camelia Valdes confirmed receipt of a truncated version of the video forwarded by the Paterson Times, but declined to comment for now.

Adams eventually cooperates with police. He signals police officers to place the handcuffs on his hands over his stomach. He is later seen put on a stretcher and put into an ambulance.

Rucker said Adams suffered a seizure soon after he was put into handcuffs.

“I couldn’t watch it. It was too disgusting,” said Hakeem speaking of the video.

The truncated version of the video is below: