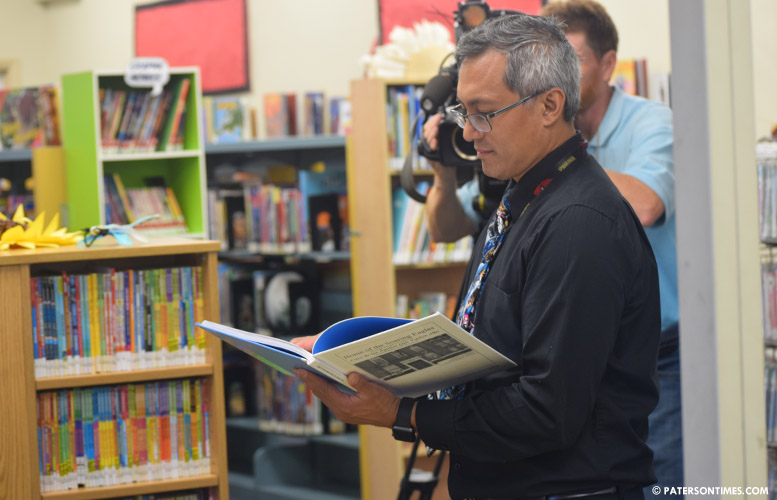 School 21 bilingual teacher Jason Velante, Sr. is publishing an 80-page book containing biographical sketches of his students. His pupils wrote touching stories of their journeys from their homelands to the United States.

“I came to the United States because my parents needed money and for me to have a better future,” wrote 9-year-old Walkiri Rodriguez, 4th grader. She aims to become a science teacher. “I want to go and be something in my life.”

Rodriguez said her mother brought her to the U.S. from the Dominican Republic. She wasn’t alone other youngsters said their families emigrated to the U.S. for work and better futures.

“It was very hard to find a job. My mom couldn’t find a job. The clothes were so expensive,” said Kevin Grullon. He was a little embarrassed to admit he was an 11-year-old in the 4th grade. “We had to do something. We had to get the visa. It took us a while to get it.”

Grullon said he did not have a bed to sleep on in the Dominican Republic.

“I came to the United States because I needed to learn some English,” said 9-year-old Nicole Tineo, 4th grader. “And my mom needed to work.” She was two years old when she was brought to the U.S.

Tineo said she had to leave behind her sister, who later joined the family.

Rodriguez, Grullon, and Tineo’s stories will appear in the new book expected to be published next month, said Velante.

70 students participated in the creation of the book, said the teacher. He is still working on a title for the book.

“The kids wrote it in English and Spanish. Some of them start in Spanish, then through Google translate, put it in English. As an ESL teacher, I hold them accountable for grammar and editing,” said Velante, who has been teaching in Paterson for five years.

The students had to use Google language tools, translation dictionaries, and computer programs to create their entries for the book, said the teacher.

“They are still acquiring English. It forces them to learn some editing skills,” said Velante. He published his first collection of immigration stories last year, he said.

His students in 6, 7, and 8th grades submitted entries for the book — “Home of the Soaring Eagles” — which was published in June 2018. The book’s subtitle read, “The Struggles of Strangers in a Strange Land.”

The stories though highlight struggles in their homelands. For example, the book published last year had young people sharing stories of escaping gangs and violence in their homelands, said Velante at the Danforth Memorial Library on Tuesday morning.

“I love my cold milk in the morning,” wrote one student. In his home country milk came after milking a cow.

Velante took two dozen students on a trip to the library. He played recordings of students reading their entries in English. Some students also read their stories in person before their peers and half-dozen reporters.

Once published, the book will be available at the city’s five libraries, said library director Corey Fleming.

“It wasn’t hard,” said Grullon speaking of writing his entry. “It makes me happy.”