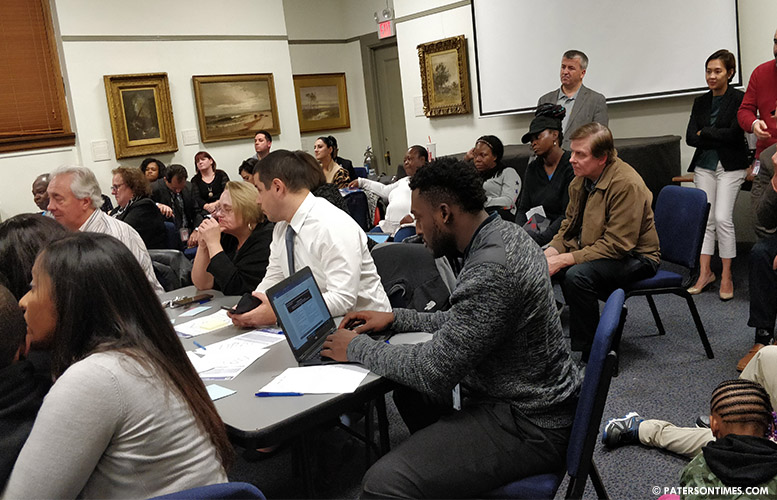 “I feel like when charter schools got started it brought life to education here in the City of Paterson,” said Brown in response to a question that asked what she likes about charter schools. “In the charter schools they have things like art and music.”

Brown said her eight-year old attends the Paterson Arts and Science Charter School on Michigan Avenue. Another parent said he likes charter schools for having superior communication applications like ClassDojo.

“The money that comes off the top that’s financing your charter schools is a detriment to the public schools. If I can’t get my child into your charter schools, he still has to go to school,” said Muhammad. “Our children that are left behind don’t have art and music and all these things you are saying you are so happy about.”

Muhammad’s comments appeared to anger some of the charter school parents at the library’s community room. The room was packed with people. Organizers had to set up tables in an overflow room and the hallway to accommodate people.

84 people registered and provided inputs. 210 people came to the meeting, according to a security guard at the library.

The attendees were asked what can be done to improve charter schools.

Some suggested extending renewals beyond five years. Every five years charter schools have to renew their charters.

Others wanted the state to speed up expansion to reduce wait-lists at charter schools.

Employees from the New Jersey Department of Education collected suggestions from parents and typed them into laptops.

The parents were put into small groups at tables. Members of each group brainstormed and debated their ideas.

Both sides, opponents and proponents of charters, agreed on one point: charter schools should be funded directly by the state. An employee of the Paterson Arts and Science Charter School told state officials that will reduce animosity between charter schools and district schools.

Paterson school district had to transfer $54.3 million to charter schools in the 2018-19 school year, creating a big budget shortfall earlier in the year. The district plugged the gap by securing a $13.5 million loan.

Residents can provide their inputs on charter schools via the New Jersey Department of Education’s website by clicking here.

The state is conducting a multi-county listening tour to review the charter school law. Five other focus groups have been scheduled throughout New Jersey. A report will be published after the outreach is completed detailing what the state has learned from the tour.