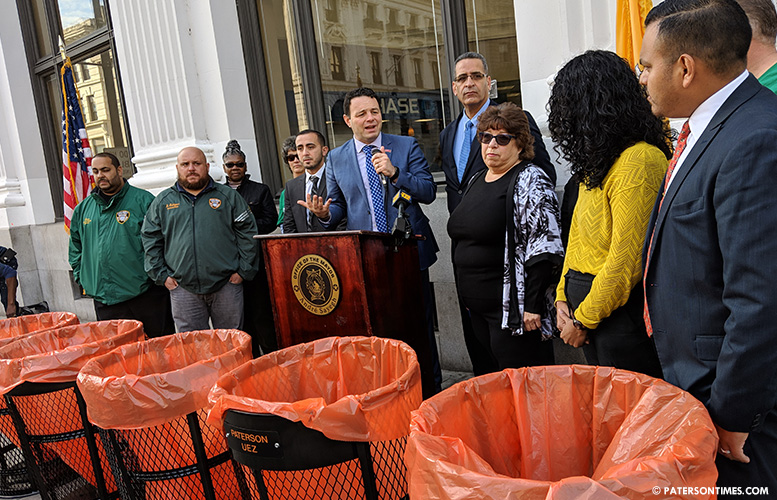 “We want a cleaner city,” said mayor Andre Sayegh standing in front of Chase Bank on Market Street. He spoke standing in front of a podium behind five distinctive garbage receptacles. He said his new initiative is inspired by a program in Texas called “Don’t Mess with Texas.”

Forestieri is contributing $4,000 to purchase cans for the program dubbed by the mayor as “Paterson is Picking Up.” Rodriguez said the total budget is $16,000. The city is contributing funds from the Clean Communities grant, he said.

Luis Velez, 5th Ward councilman, said the new containers, black with orange bags, will help to avoid a common problem: some people confuse the green trash cans and the planters. Often, planters throughout the city are filled with trash as a result.

“The perception that you are able to litter and throw your garbage on the street will not be accepted,” added Al Abdelaziz, 6th Ward councilman.

Sayegh said the Chase Bank branch has agreed to help clean the downtown. A representative for Chase Bank said an email will be dispatched to employees to volunteer to clean up the city. Employees volunteer on the clock.

Sayegh said the planters will be re-planted. He identified City Green as a partner for re-planting. But a representative for City Green said her organization and a partner group will plant Daffodils in planters on 21st Avenue.

City Green will work with partners, she said, but not take on the burden of planting all the city’s planters in downtown Paterson.

Jasmine Moreano said her group is planting 5,000 Daffodil bulbs. She said Daffodils are planted in the fall and bloom in the spring.

The mayor has launched several initiatives to clean up the Silk City, among them a program that deployed a dozen people to pick up trash from main commercial areas.

“We will make sure we are committed. This is not going to be a one-shot deal,” said Sayegh.