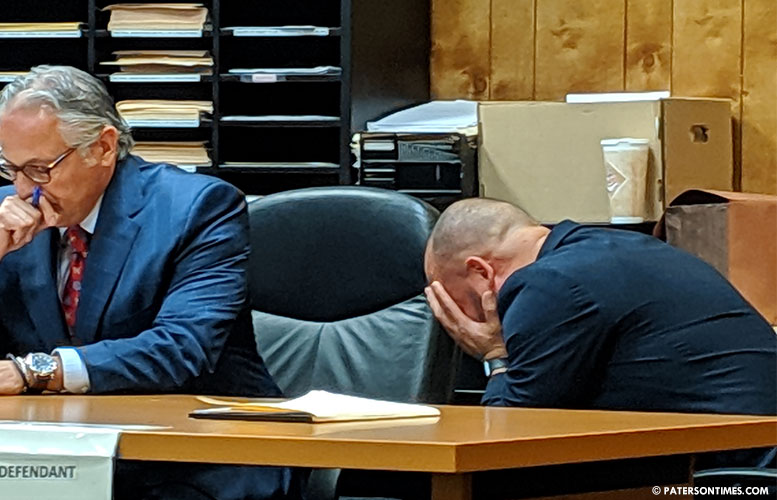 Urena was found guilty of both counts — knowingly leaving the scene of a fatal vehicle accident and endangering an injured victim – on Monday afternoon. He buried his head in his hands after the foreman read out the verdict in the Passaic County Courthouse.

His family members began to loudly weep as each guilty verdict was read out loud in the packed courtroom.

“Thank you, God! Oh God, thank you!” uttered Field’s mother Naomi Simmons as she exited the courtroom embracing another member of the family. In the hallway, a dozen or so members of the Fields’ family celebrated the verdict.

The mother, Naomi Simmons, in light green hat, tears up after verdict.

Simmons said justice has been served in her son’s death. Fields and his brother were walking on Temple Street near North 4th Street on Jun. 16, 2015 when both were struck by Urena. His brother survived the accident.

The mother struggled for justice in the death of her son. She led 200 people to march to City Hall in late June 2015 to demand justice for her son. Ten months later, a grand jury indicted Urena on two counts.

Urena testified in the case that he thought he hit a pothole. He hadn’t realized he had struck and killed a person even after driving home to North Haledon.

The jury had the judge re-play Urena’s testimony on Monday morning prior to reaching the unanimous verdict.

Urena faces a maximum of 15 years in state prison. Assistant prosecutor Peter Foy declined to comment when asked what sentence the state will recommend at sentencing. His sentencing is scheduled for Dec. 7 at 2 p.m.

Judge Adam Jacobs revoked his bail and remanded him to jail. Urena won’t be housed at the Passaic County Jail, where he may come in contact with people he put there over the years, but will be transferred to another county jail.

Urena’s attorney Anthony Iacullo unsuccessfully argued to keep him out of jail until sentencing. Iacullo told the judge Iacullo does not have any previous convictions and is not a flight risk. He said Urena has a young son and a fiancee.

Iacullo said the judge could release him on electronic monitoring or place him on house arrest.

Urena, 33, joined the Paterson police force in 2008. He was briefly suspended and then put back on the payroll.

“Whenever someone is convicted of a crime that’s termination,” said police director Jerry Speziale on Monday afternoon. He said the department will follow usual civil service process.