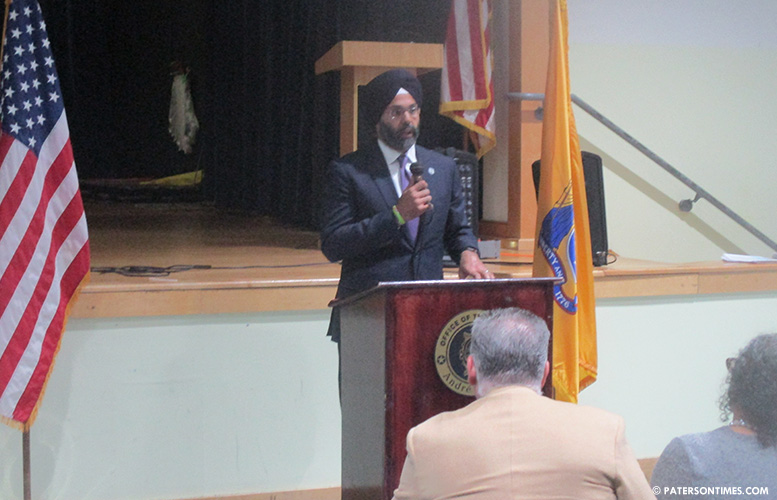 In a pair of meetings focused on strengthening community and law enforcement relations, New Jersey Attorney General Gurbir Grewal spoke at the New Roberto Clemente School and the Hani Awadallah School, both in Paterson.

Mayor Andre Sayegh and Passaic County prosecutor Camelia Valdes introduced Grewal to a room of about 30 people at the New Roberto Clemente School on Nov. 29.

Sayegh emphasized the importance of collaboration with the Attorney General’s Office concerning neighborhood safety while Valdes praised Grewal’s work addressing critical challenges, including the stemming of violence and immigration reform.

“Parents in Paterson need to feel safe walking their children to school,” Sayegh stated.  “The last thing we need is to be afraid.”

“Attorney General Grewal acknowledges the issues with an open heart and mind,” Valdes said.  “He provides tools and brings solutions that are palpable based on data.”

Grewal initially referred to a press conference held earlier in the day.  Convened at Liberty State Park at the concourse of the Central Railroad of New Jersey Terminal, Grewal announced his, “Immigrant Trust Directive.” The measure establishes new rules on how New Jersey law enforcement officers interact with federal immigration authorities.  The directive limits the assistance that officers may provide to federal representatives, including Immigration and Customs Enforcement (ICE) officers.

“I stood today at Liberty State Park today across from where 17 million immigrants came to America through Ellis Island,” Grewal told the audience. “In the last two years we’ve seen rhetoric that has come out of Washington that has been unwelcome to immigrants.”

Grewal said that under the Trump administration “people feel threatened to go to work or report a crime. They feel that they will be locked up by ICE or swept up after picking up their children from school.”

The attorney general was speaking in a city where more than a third of people residents are foreign born, according to U.S. Census data.

Concerning opioids, Grewal pledged to provide treatment to those addicted but to “go after those who supply, the gangs that stand on the street corners.”  He called Paterson an “epicenter for opioids.”

Referencing the New Jersey cities of Trenton and Camden, as well as Paterson, Grewal called violence “an epidemic.”

“Access to firearms must be reduced,” the attorney general said.  “We must stop the straw providers that are bringing in guns across state lines.”

To bolster police-community relations, Grewal said his office has committed to holding four yearly meetings in each of New Jersey’s 21 counties to address pertinent topics. He said that sometimes police shootings can be misunderstood. Grewal also stressed that when a police shooting does occur, there are “thorough checks and balances and multiple levels of investigation.”

In a question and answer period, Paterson police chief Troy Oswald asked the attorney general, “When can an officer ask about immigration status?”

Grewal said that inquiries about immigration status in New Jersey are “absolutely prohibited.”  He said the only exceptions are “when an arrest is made or when during an investigation criminal circumstances arise.”  Grewal explained that getting pulled over for a DUI does not meet the standard of a criminal circumstance.

Grewal said that the recent elimination of the requirement of cash bail for those incarcerated in New Jersey has reduced pre-trial jail time and helped reduce the number of violent crimes committed. He also said he would be open to leading criminal record expungement seminars in Paterson in conjunction with the Passaic County Prosecutor’s office.

Another question posed by the audience was the use of profanity by police officers when dealing with the public.

“That should never be the case,” Grewal said.  “There is zero tolerance for profanity and disrespect. If that happens and you are afraid to go to the police office, you can go to the county prosecutor’s office or the attorney general’s office. I support the use of body cameras by police.  After an incident, the video should be available for the public to view within 20 days.”

In October, a police takedown of a deaf man sparked outrage in Paterson. Two women complained about police officers cursing and disrespecting them.

In response to a question by Paterson city councilman Michael Jackson about the disproportionate number of African-Americans that are arrested or charged with crimes, Grewal noted his office’s emphasis on officer training.

“Everyone has some kind of subconscious bias,” Grewal responded.  “By the end of 2019 every state trooper and county detective will have taken training concerning implicit bias.”