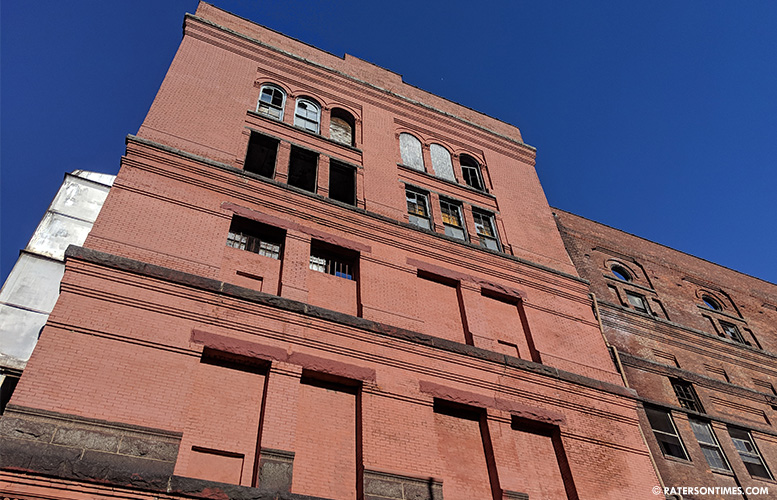 A Clifton developer has received municipal approval to build an indoor soccer field and gym training facility at the old Hinchliffe Brewery site on Governor Street.

Under the proposal, the developer, Norberto Curitomai, will remove the third, fourth, and fifth floors of the existing five-story building at 49-55 Governor Street.

Curitomai will remove the silo structure and build a 140-foot by 215-foot indoor soccer field.

The board approved the $1 million project late last month.

Curitomai did not respond to a call for comment for this story.

The Hinchliffe Brewery was built in circa 1890. It was closed during the Prohibition, according to city records. The building remained intact until it was damaged by a fire in 1997. Fire destroyed the brew house and damaged a portion of the site. But the large cold storage building that included the silos was spared.

After the fire, the property was used as a dump site. A small portion of the old Hinchliffe Brewery remains at the site.

A study by the city mentions the following historical facts about the building:

“The Hinchliffe Brewing and Malting Company was founded in 1890 by the Hinchliffe brothers, the three sons of the English founder of the Eagle Brewery in 1861. The Eagle was likely the earliest medium-scale brewery in Paterson. John Hinchliffe began under the name Hinchliffe & Co., later changed to Shaw, Hinchliffe & Penrose in 1867. While business did well, Penrose withdrew in 1878, and the name was changed to Shaw & Hinchliffe. Soon afterward in 1881, Shaw went abroad due to illness and died there, leaving the firm under its founder, who died in 1886. His sons, John, William and James Hinchliffe inherited the brewery.

Hinchliffe Brewery photograph from 1890 from a municipal report.

In 1890, they incorporated as the Hinchliffe Brewing and Malting Company and hired the firm of Charles Stoll & Son of Brooklyn, N.Y., specialists in brewery architecture, to draw up plans for Paterson’s largest and most modern brewing facility. Stoll’s plan incorporated and updated the existing Eagle brewery on Governor Street, retaining an earlier office and malt house that faced on to Ann Street. Along Governor Street, Stoll replaced a boiler house and cooper’s shop with a new brick brew house and cold storage building that was state-of-the-art, taking advantage of advances in mechanical refrigeration.

The Governor Street façade of the new buildings was exuberant, yet substantial, a common characteristic of urban breweries of the period. The cold storage was particularly important because it allowed for the production of lager beers, then coming into their own as a staple mass-produced beer. In 1899, the

Hinchliffe brewery merged with the Paterson Consolidated Brewing Company, which included the former Katz brewery located in the block to the east of Hinchliffe. The Hinchliffe family became prominent in Paterson politics and civic life, with John Hinchliffe, Jr.

The Hinchliffe Brewery remained in operation until Prohibition in 1919, and, although evidence is sketchy, it seems to have continued in operation at least to some degree through Prohibition, before reopening officially in 1933. The brewery was finally closed about 1957.”