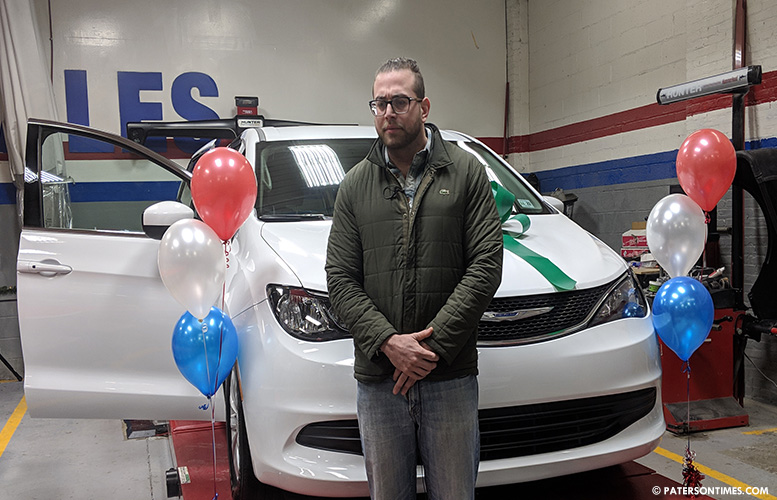 Christmas came early for Brian Youssef. On Friday, the Garfield resident, who served three tours with the Marines in Iraq, received a refurbished 2017 Chrysler Pacifica, 5,000 miles on the odometer, from Dynasty Auto Body in Paterson.

“I’m still in disbelief,” said Youssef, 33, standing in front of his new car at the Dynasty Auto Body on Pennsylvania Avenue. He was incredulous when his landlord told him about the Recycled Rides program, but he nonetheless submitted an application.

Youssef, who has been struggling since returning from Iraq, has had a string of bad luck. He held a series of odd jobs, including digging holes for ventilation units. His most recent job was managing a pizzeria in Ridgewood.

The pizzeria was sold and the new owner decided to cut costs. He was laid off in early 2017. About six months ago, his car overheated and needed repairs. He did not have enough money to make the costly repairs.

“It drove me crazy,” he said speaking of not having car.

Lack of transportation made it difficult for him to attend his medical appointments, attend classes, and go for job interviews. He was injured in an improvised explosive device (IED) explosion during his second tour in Iraq and has been receiving treatment for post-traumatic stress disorder.

This didn’t stop him from returning for a third tour.

“My first year getting out was a big struggle,” he said. Unemployment rate was more than 8-percent in 2012. “I’d walk into a job interview there would be 30 applicants waiting.”

Meanwhile, he attended trade school and earned an HVAC certification, he said. He is attending Bergen Community College and actively seeking employment. At one point, he sought to become a police officer, but could not due to PTSD.

Youssef is the seventh veteran to receive a donated car from Dynasty Auto Body which participates in the Recycled Rides program run by the National Auto Body Council. Vehicles damaged in collision are repaired and donated to people in need.

“This cause is very close to our heart,” said Anne Kolea. She owns the shop with her husband John Hamdan.

Insurance firm Geico purchased the vehicle from an auto auction. Dynasty Auto Body refurbished it. Hamdan said the vehicle is valued at $36,000. His shop spent $10,000 to refurbish it, he said.

“John grew up in Paterson. He started working at the age of 12. He didn’t have anything. Now that he is successful, he wants to give back,” said Kolea.

Youssef was handed the vehicle, decorated with a green bow and patriotic balloons, at a celebration at the body shop on Friday.

Celebration featured the Geico gecko, a color guard made up of first responders, and elected officials.

“Brian proudly served our country and this vehicle is a token of our community’s gratitude,” said mayor Andre Sayegh. “We appreciate the generosity of Anne Hamdan and Dynasty Auto Body, especially at this time of year. This gift will certainly lift Brian’s spirits and alleviate the burden of depending on public transportation.”