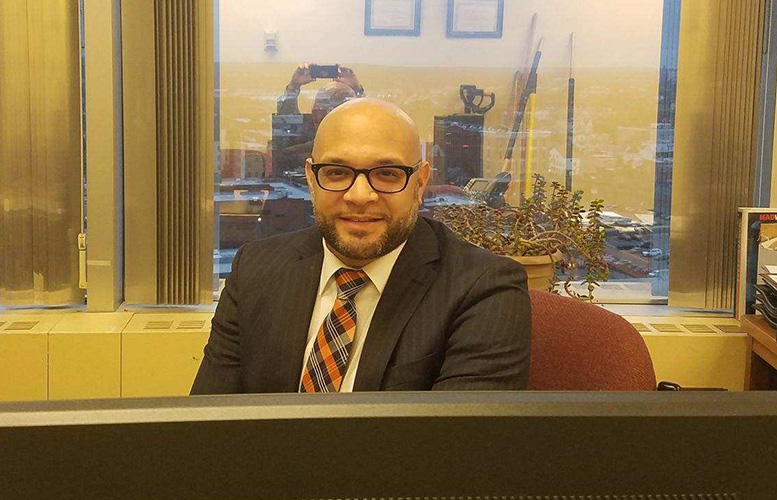 Cruz was picked as the district manager by the business district’s board. He was among 74 candidates to apply for the job.

List was narrowed down to six candidates, said Jamie Dykes, business administrator for the district, in announcing the pick on Monday afternoon.

Cruz beat out five others for the job.

“I am beyond excited for this opportunity. This is a new day for Downtown Paterson. My mission is to create and promote an exciting environment for people to visit, shop and work,” said Cruz (pictured).

Cruz plans to be a hands-on manager for the district, he said. His priorities include tackling panhandling, graffiti, and uncleanliness in the city’s main commercial district.

“I don’t consider this a behind the desk job. I plan to be on the street to interact with the businesses and shoppers,” said Cruz. “My mission is to rebrand downtown and make it safer and cleaner for residents of Paterson and out-of-towners.”

Cruz previously worked as the director of operations for Any Excuse For A Party of Fairfield, a multi-million-dollar party planning company. The company supplies inflatables rides, water slides, cookout tents in summer, and inflatable snow globes in the winter.

The company will have 3-6 employees on the street, depending on the season, said Dykes.

Cruz’s official title is district manager. Previously, the district had a director. Dykes explained with the hiring of the management firm the duties of the person in charge has been changed. It’s also a nod to critics that the district is heading in a new direction.

“I’m hopeful he’ll be successful. I’m sure anything is an upgrade in comparison to what we had,” said council vice president Michael Jackson. He represents the 1st Ward, where the business district is located.

Jackson vehemently criticized the district’s previous director Sheri Ferreira and Dykes. He swayed his colleagues to vote down the district’s budget on the City Council, creating a cash flow problem, that ultimately led to Ferreira’s resignation in May. The budget was later approved by the council.

Cruz is a lifelong Paterson resident. He serves as the chairman of the Tri-County Chamber of Commerce. He also sits on the boards of the Paterson Education Fund and the Paterson Task Force.

Cruz is the fiancé of school board president Oshin Castillo.

“They want response and that’s what we’re going to give them,” said Cruz referring to downtown Paterson merchants.